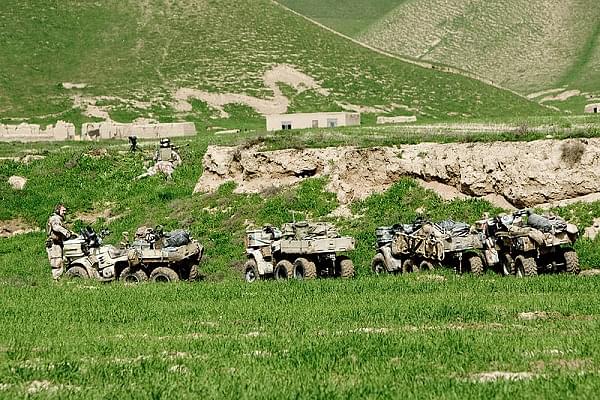 Representative image of ATVs belonging to the Norwegian military in Afghanistan. (Pic by PRT Meymaneh via Wikipedia)

The withdrawal of US forces from Afghanistan is a "great victory" for Muslim nations, Deputy Secretary-General of the Iran-based World Assembly of Islamic Awakening Hossein Akbari said.

"Afghanistan has now entered a new stage. In fact, the 20-year presence of the United States in Afghanistan and eventual expulsion from the country has created a power vacuum and power imbalance in Afghanistan that affects all developments and equations," Akbari was quoted as saying by Xinhua news Agency on Sunday.

He made the remarks at a news conference over an online international meeting on Afghanistan scheduled to be held in Tehran on Monday.

The webinar, dubbed Afghanistan, Sustainable Peace and Security, will be opened by Ali Akbar Velayati, the senior advisor to Iran's Supreme Leader who chairs the World Assembly of Islamic Awakening.

More than 40 Afghan political figures and representatives of Pakistan, Russia, Uzbekistan, Kyrgyzstan, Tajikistan, Turkmenistan and Iran will deliver speeches at the meeting, according to Akbari.

"We hope that this conference will help spread of peace in Afghanistan as Iran has always made its utmost effort, with its mediating role, to convince parties to negotiate instead of war," he said.

Iran hosted an intra-Afghan talk earlier this month, which was attended by representatives of the Afghan government and parliament, the Taliban militant group and figures supporting the republic system in the country.