Kashmiri Parties Want To Block Union Govt From Helping These Refugees In Jammu. Here’s Why. 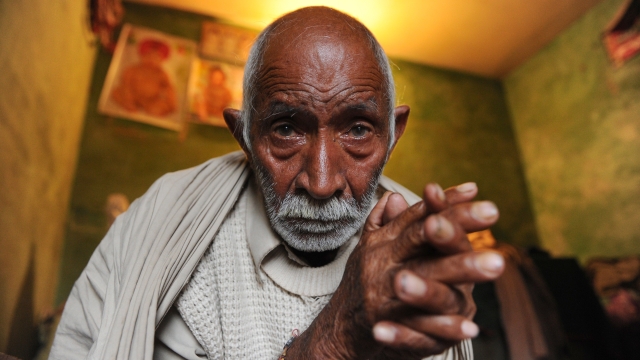 Hindu refugee from West Pakistan, Mangu Ram (82) sits inside his concrete shanty in Surej Chak, on the outskirts of Jammu. (TAUSEEF MUSTAFA/AFP/Getty Images)

Opposition and separatist parties in the state of Jammu and Kashmir have come together to oppose BJP-PDP government’s decision to issue Domicile Certificate to West Pakistan Refugees (WPRs) living in the state. Syed Ali Geelani, the ringmaster of the Hurriyat crowd, has red-flagged the decision, saying that it is against the Constitution of Jammu and Kashmir and a ploy to change the demographics of the state. Other factions of the separatist camp and mainstream political parties stand with him on the issue.

But who are these ‘West Pakistan Refugees’ and what is their story? We explain below.

In the wake of Pakistani aggression in Jammu and Kashmir in 1947, over 5,764 families, who migrated from the then West Pakistan to escape communal persecution, are residing mainly in the Jammu Division of the state. They have steadily grown into substantive numbers. According to Home Ministry data, 31,619 Displaced Persons of Pakistani-occupied Jammu and Kashmir have settled in the Jammu region of the state.

Most of these refugees, 85 per cent by some estimates, live in inhuman conditions and often suffer discrimination. Though the Central government has undertaken programmes to rehabilitate these families, the hostile and communal atmosphere created by the separatist and Islamist organisations in the state has made life worse for them.

The union government has taken various measures aimed at improving the living condition of these families. Special provisions have been made to facilitate admission to their wards in professional and other educational institutions, bank loans without mortgage for taking up self-employment/business activities, and vocational training for youth.

But without being citizens of the state of Jammu and Kashmir, which enjoys special privileges within the Indian constitution, these families can’t own land, apply for jobs and do not enjoy the same privileges as other citizens of the state. To eliminate these constraints, the government has introduced a scheme to provide permanent domicile certificates to these families.

Mainstream political parties and Islamist separatists have opposed the idea, dubbing it as a conspiracy to alter the demographic composition of the Muslim majority state. This is not the first time that the Islamists have come out in true colours. These factions had reacted similarly when the state government decided to allot a piece of land to the Shri Amarnathji Shrine Board in 2008. The result is, religious minorities in the Muslim-majority valley, Indians or WPRs, live as second-grade citizens with almost no land rights and under the threat of persecution.