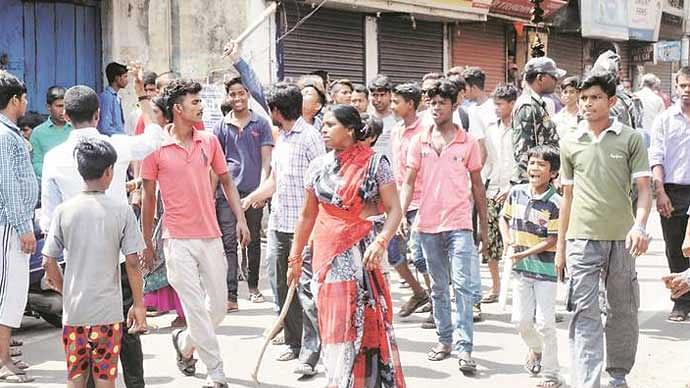 Locals protesting the lynchings in Jharkhand.

Of late, some journalists have been pushing the narrative that mob violence, especially cases of lynching, has risen in the country in the recent years. This is best reflected in a tweet published by journalist Shekhar Gupta, in which he refers to India as ‘Lynchistan’.

Is Hindustan really becoming Lynchistan? Or is this yet another false narrative being propagated to deliberately show the country, and the ruling party, in poor light?

The truth is, like the church attacks of 2014 and the intolerance-award wapsi nexus of 2015, this too is a case of a few stray incidents being projected as the new norm in the country. Some are even trying to spin every such unfortunate incident as communal even before all the facts are known. Only yesterday (26 June), Swarajya explained how a dispute over train seats in Haryana was incorrectly reported as a case of lynching over beef.

Geneticist and author Anand Ranganathan took to Twitter on 25 June to expose the bias of the people involved in pushing this false narrative. Going back in time to dig up relevant data for the past years, the author found that cases of lynching and mob violence were as prevalent in early 2010s as they are now. He was able to unearth a dozen cases from the year 2013, when the United Progressive Alliance was in power.

“If you believe India has become Lynchistan because of a dozen incidents over the past 3 years, then you must also believe that India was Lynchistan in 2013, when more than a dozen lynchings happened... Or in 2012. Or in 2014. But then you didn’t believe so. Or if you did, you kept it yourself,” wrote Ranganathan in a tweet.

A “rudimentary search” for cases of lynching in 2012, according to Ranganathan, yielded 16 cases, including those that were communal or casteist in nature. “But it was Hindustan then, not Lynchistan,” he pointed out, shedding light on the hypocrisy surrounding the issue.

The fact is, every act of mob violence, such as lynching, must be condemned unequivocally. The attacks should not be looked at differently, depending on which party is in power and which narrative one would like to propagate. The perpetrators for all such crimes should be caught and brought to justice. But picking and choosing the right time to condemn these incidents betrays a hidden motivation.

Painting the entire country in a poor light based on a little more than a handful of cases over three years clearly reeks of hypocrisy, and a need to prioritise one’s agenda over their country.