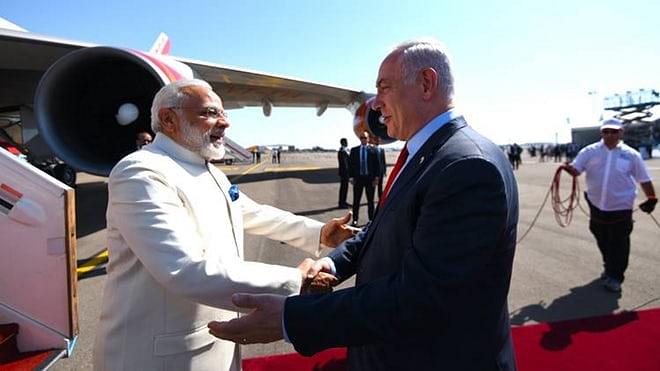 Netanyahu would be only the second Israeli Prime Minister to visit India since diplomatic relations were established between the two countries in 1992. His visit next year would be happening almost 15 years after the first visit by Prime Minister Ariel Sharon to New Delhi in 2003.

The Israeli Prime Minister would be received by Modi in Ahmedabad on his arrival on 14 January. Modi has in the past welcomed Chinese President Xi Jinping and Japanese Prime Minister Shinzo Abe in his home state.

Netanyahu would then be holding most of his official meetings in New Delhi on 15 and 16 January . “The detailed programme is still being worked out but it will include meetings with top leadership in India”, informed sources here said.

The Israeli leader would also be going to Mumbai on 17 January where he would be visiting the Jewish Chabad House, a site of 2008 terrorist attack in Mumbai.

He would head back to Israel on January 18. There could also be a possible stopover in Agra during the visit.

“In the past year, I have visited all continents besides Antarctica,” Netanyahu said at the opening of the Knesset’s (Israeli parliament) winter session last month. And in January, I will make a reciprocal visit to my dear good friend, Narendra Modi, the Prime Minister of India, whose population is a significant part of humanity,” he added.

Modi’s standalone visit to Israel in July this year celebrated 25 years of establishment of diplomatic relations between the two countries. The Indian prime minister skipped Palestine during his trip leading many analysts to say that New Delhi was changing its rules of engagement in the region.

Modi’s visit, the first by an Indian Prime Minister to Israel, was termed by many as de-hyphenation of New Delhi’s ties with the Palestinians. Palestinian President Mahmoud Abbas was invited to New Delhi a few weeks before Modi’s visit to Israel, in what was his fifth visit to India in 12 years and the third state visit.

Netanyahu had called Modi’s “historic visit” a “very significant step” in strengthening bilateral relations that are on a “constant upswing”.

The Israeli leader has also grabbed every opportunity to emphasise on his “personal chemistry” with his Indian counterpart, including at the United Nations General Assembly in September where he shared the memories of Modi’s three-day visit to Israel from July 4-6. “We imagined the endless possibilities for Israel, India, for all humanity,” he had said during his UNGA address.

Modi extended an invitation to Netanyahu to visit India at a mutually convenient time” during a 5 July press conference in Jerusalem. Netanyahu had described the invitation as “a deeply moving moment for me, both in personal, but also in national and international terms”.

Both the governments have taken several measures since Modi’s Israel trip to strengthen bilateral ties. Some of them include establishment of a USD 40 million joint fund to encourage Israeli and Indian business cooperation, agreements permitting and extending incentives to Bollywood filmmakers looking to shoot in Israel, efforts to promote growth in tourism, and a joint government project in the fields of water and agriculture. (PTI)