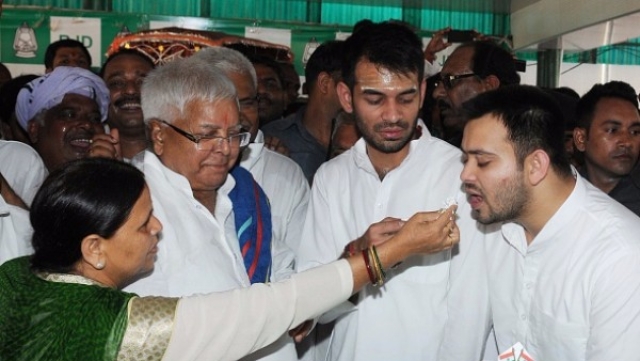 Devi made the remarks after casting her vote during the first phase of the Lok Sabha elections in Bihar. Distressed by Tej Pratap staying separately from the rest of the family in Patna, she said, “It’s enough now, come back home son.”

Ever since visiting Lalu Prasad at Ranchi last year, Tej Pratap has not made a return to his family home. He has reportedly had a falling out with his younger brother, Tejashwi Yadav, who is de facto running the RJD.

Devi however, rubbished such reports of differences between the two brothers.

"It is all a creation of vested interests," she stated.

She hinted at the possibility of the BJP and the Janata Dal (United) trying to ‘mislead’ Tej Pratap.

The breakdown in relations between the two brothers happened after a disagreement about fielding a candidate of Tej Pratap’s choice from the Sheohar Lok Sabha seat.

Tej Pratap had recently announced that he would create his own political outfit called the ‘Lalu Rabri Morcha’ to contest the Lok Sabha elections.