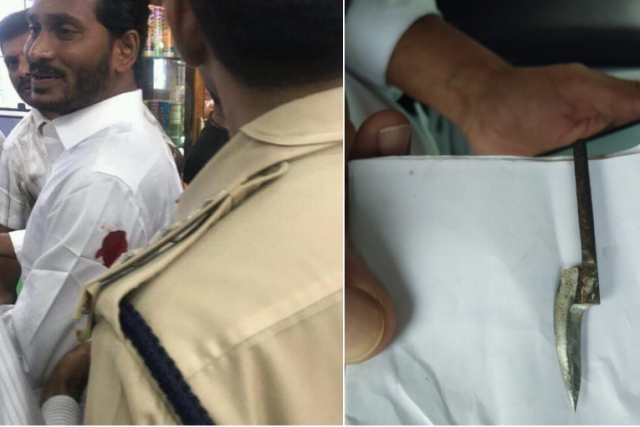 Reddy was at the Visakhapatnam Airport to board a flight to Hyderabad. A man pretended to offer him a cup of coffee as he was walking toward the VIP lounge. Malla Vijay Prasad, the president of YSRCP in Visakhapatnam said that the man, identified as Srinivas by the police, pulled out a knife and injured Reddy.

“Srinivas suddenly whipped out a blade that is normally used during rooster fights and lunged at Reddy. He clearly wanted to stab Reddy in the neck, but Reddy deflected the blade with his hand and suffered an injury on his shoulder.

Srinivas was overpowered by YSRCP workers, and handed over to the police at the airport,” Vijay Prasad, who was with Reddy at the time.

The police have detained Srinivas.

Reddy received first aid at the airport and boarded a flight to Hyderabad to consult a doctor there.

I strongly condemn the cowardly attack on @ysjagan this is a major security lapse which must be probed @sureshpprabhu how can a person bring a dagger inside the airport,and in a lounge ,politicians are vulnerable with this NEW phenomenon of selfies