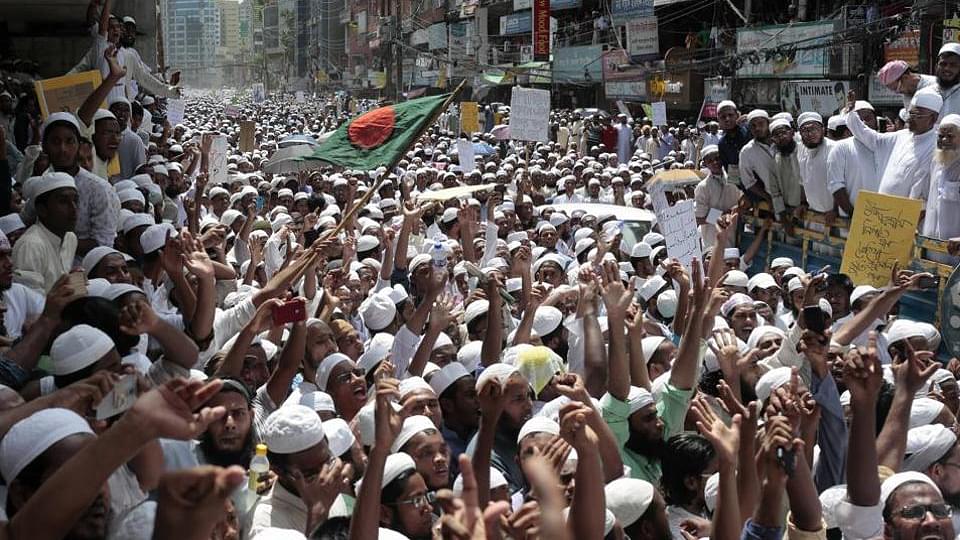 Joint Commissioner of Dhaka Metropolitan police, Mahbubur Rahman on Wednesday said that the Hefazat militants have confessed to creating a Taliban state in Bangladesh, similar to Afghanistan.

Rahman told IANS: "The militants have said that several Jamaat-e-Islam and Hefazat leaders are linked to the militant outfit Lashkar-e-Taiba (LeT). Besides, the police have also collected various pieces of evidence in connection with the matter. Mamunul Huq and Harun Izhar, the Islamist radicals led the massacre and anarchy to oust the government headed by Sheikh Hasina, mostly funded by the militant outfit of Pakistan.

Those are determined to create a Taliban state in Bangladesh which goes against the present secular government. The militant leaders said that they are against the values of our 1971 Liberation War."

The militant leaders went to the Minister's Dhanmondi official residence on Tuesday night.

State Minister for Religion, Faridul Haque Khan was present at the residence of the Home Minister at that time.

At the meeting, the Hefazat leaders demanded an end to the arrest and harassment of the organisation's leaders and activists, release of the arrested leaders, and reopening of the Qawmi Madrasas, the breeding ground of the militants.

"The Home Minister has assured that our demands would be taken into consideration at the meeting," said Nurul Islam Jehadi to the media.

Earlier, Bangladesh's Prime Minister and leader of the Parliament Sheikh Hasina on April 4 has promised the "strongest possible action" against Islamist radicals responsible for violent protests over Indian Prime Minister Narendra Modi's visit to the country, in her speech to the lawmakers in the Parliament.

She also warned that the Hefazat radicals would face "dire consequences" if they continued their violence over Modi's visit.

Fourteen supporters of the radical Hefazat-e-Islam group were killed in police shootings across the country as Hasina's government stood by its decision to invite Modi as a guest of honor for celebrations of the 50th anniversary of Bangladesh's independence on March 26.

"We had invited the Indian Prime Minister to express our gratitude to Indian people for their unstinted support during the 1971 Liberation War," Hasina added.

Earlier, the Hefazat leaders met the Home Minister on April 19.