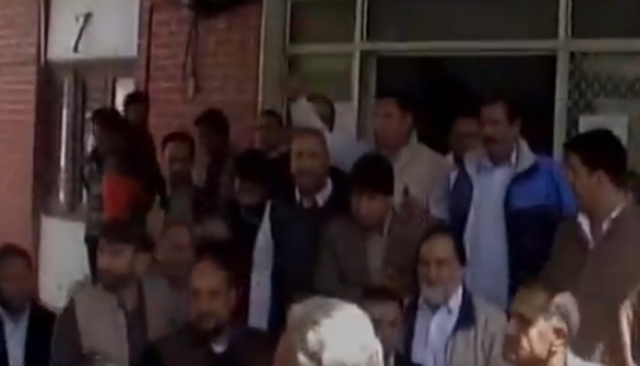 Members of the National Conference (NC) and the Congress in Jammu and Kashmir, allegedly upset with the decision to defer bypolls for the Anantnag Lok Sahba constituency, gheraoed the District Collector and shouted anti-India slogans.

The Anantnag seat has remained vacant since June 2016 when Mehbooba Mufti vacated the seat to contest the Assembly elections after becoming the Chief Minister. Polls were scheduled to be held on 12 April but have now been pushed back till 25 May.

Shouts of Indian Democracy Murdabad were heard from the NC members inside the Collectorate office.

By-elections were deferred after the Government of Jammu and Kashmir submitted a report to the Election Commission of India stating that the Law and Order situation was not conducive to holding polls.

Congress leader Saifuddin Soz further stated that the law and order situation was created by India and not Pakistan.

#WATCH: Congress leader Saifuddin Soz maintains his stand that 'current problem in Kashmir is created by India and not by Pakistan' pic.twitter.com/2tqvSdcvjD