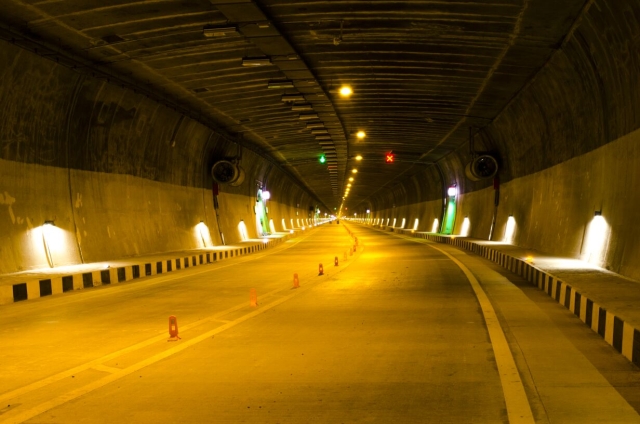 The 9 km-long Chenani-Nashri tunnel, the longest such state of art tunnel in the country, connecting Udhampur to Ramban in Jammu has officially been renamed as ‘Dr Syama Prasad Mookerjee Tunnel’ in a ceremony today (24 October).

Constructed at a cost of Rs 2500 crore, the tunnel cuts down 31 km of travel distance and reduces the travel time between the two points by about two hours, in addition to substantial savings in fuel cost.

The ceremony was attended by Union ministers Nitin Gadkari and Jitendra Singh who spoke on the upcoming infrastructure projects in J&K.

Union Minister for Road Transport and Highways Gadkari said that Rs 6000 crore worth of road projects have been taken up in the state during the last five years. These include ring roads around both Jammu and Srinagar, and construction of Zojila Tunnel among others. He said these projects will be major game changers for the people of the state, bringing employment and socio-economic development.

For the first time, a monumental project being named after Dr #SyamaPrasadMookerjee, who was arrested while entering Udhampur Lok Sabha Constituency at Lakhanpur on 11th May 1953. Later, he was driven through this National Highway to be lodged as detenue at #Srinagar. pic.twitter.com/3XJP6dcGl7

Minister Singh recalled how 66 years ago, Dr Mookerjee was arrested illegally from Lakhanpur, and was taken to Srinagar through Chenani Nashari. Dr Mookerjee was a sitting member of Lok Sabha at that time. He said this is a tribute to the struggle of workers, and redeems Dr Mookerjee’s pledge of ‘Ek Vidhaan, Ek Nishaan, Ek Pradhan.’