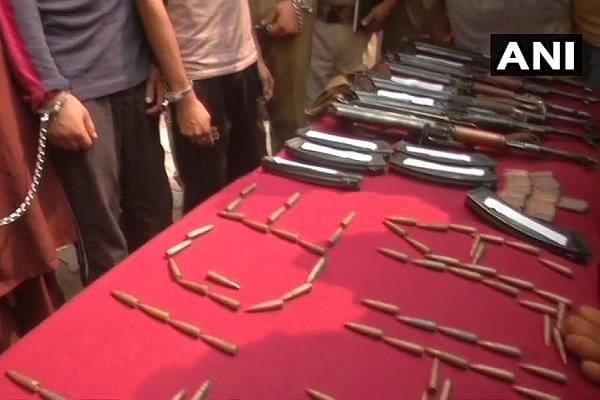 The arrested terrorists along with the weapons seized from them.

Jammu and Kashmir (J&K) Police have arrested three Jaish-e-Mohammed (JeM) terrorists in Kathua who were attempting to smuggle in assault rifles and ammunition from Bamyal in Punjab to the state, reports ANI.

The three were carrying the weapons in a truck which was headed towards the Kashmir Valley. Four AK-56 rifles, two AK-47 rifles, as well as six magazines and 180 rounds of live ammunition were recovered from the vehicle.

In light of this seizure, SSP Kathua, Shridhar Patil said that the police will increase check along the southern border with Punjab.

After the revocation of Article 370 earlier last month (August), normalcy has largely returned to the state, with any major untoward incidents being avoided. However, recent reports suggest that Pakistan is desperately trying to foment trouble in the valley but trying to push in terror cadres across the LoC.

Most of them are however either neutralised or captured by security forces.