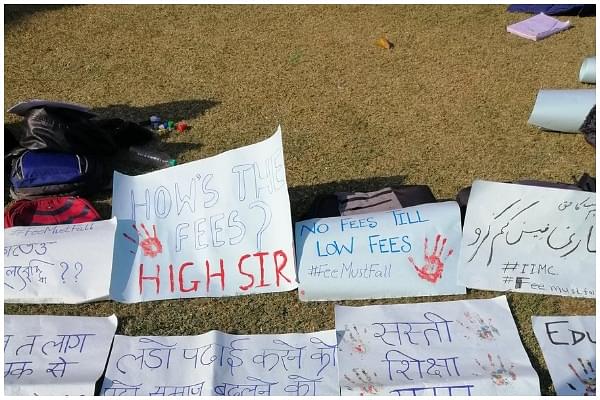 After JNU, the protest over fee hike in public funded institutes reached the Indian Institute of Mass Communication (IIMC), as the students of the institute protested against the "unaffordable" fee structure, and accused the administration of the institute of turning a "blind eye" to their issues.

"For the past one week we are trying to seek redressal of our issues through dialogue but the Administration has been turning a blind eye to our issues saying it is beyond their ambit to alter the fee structure. Now, that we have tested the other resorts, protest is the only option," says Hrishikesh, a student of Radio & TV Journalism at IIMC.

The fee for a course in Radio & TV Journalism is Rs 1,68,500, for Advertising and for PR it is Rs 1,31,500, for Hindi Journalism it is Rs 95,500, same for English Journalism, and Rs 55,500 for Urdu Journalism. Hostel and mess charges cost around Rs 6,500 for women and Rs 4,800 for men every month, the students said. Protesting against the hiked fees, the students had also staged a strike in the campus on Tuesday (3 December).

The protest by IIMC students comes after the protest by JNU students over proposed hike in hostel charges in the centre-run university has been catching eyeballs around the nation.

The JNU students have been protesting against the varsity administration's move to hike hostel, mess and security fee, reportedly by 400 per cent. It has also limited the hostel timings. While the JNU administration later announced a 50 per cent concession for those belonging to the BPL (below the poverty line) category, the students rejected it terming it as an eyewash and demanded total rollback.

However later, the varsity further extended the concession on services and utility charges, which would benefit all students and not just BPL students, but the agitating students were unmoved with the announcement.