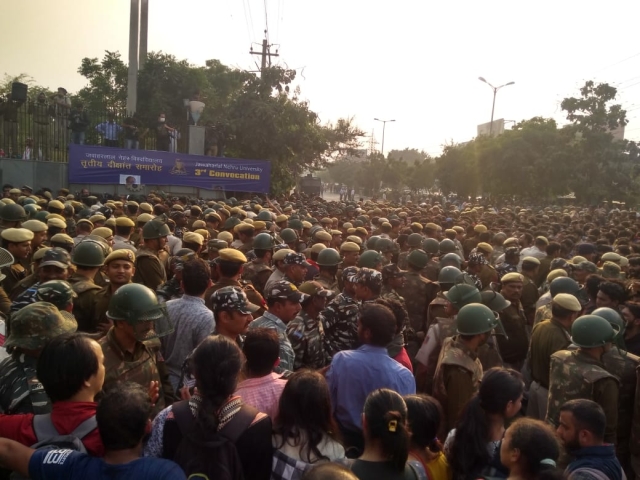 The agitation by the students of Jawaharlal Nehru University (JNU) on the issue of hike in hostel fees took political colour on Sunday when Left MPs and leaders used the platform to attack the policies of the Modi government and alleged that the new reforms in education including hike in fees are being made on the basis of a report authored by leading industrialists Mukesh Ambani and Kumarmanglam Birla in the previous NDA rule under Atal Bihari Vajpayee.

JNU Students Union on Sunday (17 November) called some Left MPs and leaders to highlight their agitation against the Vice Chancellor and administration before their march to Parliament on Monday (18 November).

CPI-M MP from Kerala K K Ragesh said that he was cautioned by the JNU Registrar through e-mail not to attend the protest as it would be contempt of High Court orders. Lashing out at the VC and administration, Ragesh said that this is "not fascist Hindu Rashtra" and "We are still living in a democracy".

Slamming the JNU VC, M Jagadesh Kumar for not negotiating with the students, the Left MP said that he should remember that "He is VC of a university, not Superintendent of Tihar Jail".

Ragesh alleged that all the education reforms being pursued by the present government including the New Education Policy, raising fees, ending student politics is part of the recommendations of a committee comprising Mukesh Ambani and Kumarmangalam Birla on reforms in education which gave its report in 2001.

Ragesh said the government never said it had accepted the committee's recommendations but all the proposed changes are being implemented now. He alleged that the government is trying to hike fees of public education institutions and creating institutions for the elite. He said the institutions will become like Jio University with no students and faculty but become institutes of eminence.

He asked the government to intervene in the JNU matter and assured that MPs across party lines will raise the matter in Parliament.

He said the government is deliberately raising the cost of education in institutions and creating an atmosphere through the media that why institutions like JNU are being given freebies.

As the lights went out during the protest session, the CPM leader said, "one man is trying to throttle democracy."

JNU Students Union President Aishe Ghosh said that the new National Education Policy has been formulated to aim at generating profits and institutions like JNU are being targeted.

M Jagadesh Kumar in a tweet earlier in the day asked the students to return to their classes. "JNU Administration appeals to the JNU students to return to the classes and labs and resume their academic and research work so that the losses incurred already on these counts may be compensated. This will help in completing the academic programmes without any further obstacles", he said.