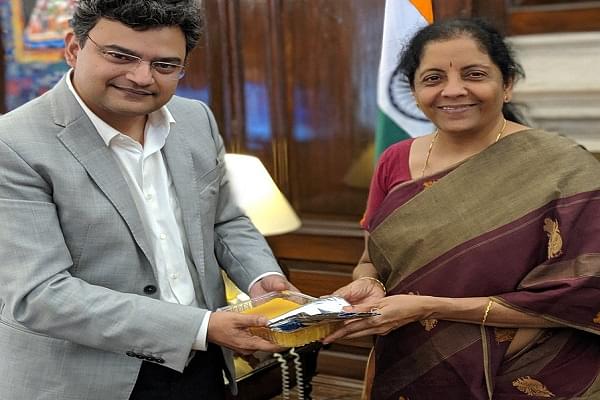 Ranganathan who is a big Mysore Pak fan joked on Sunday (15 September) after meeting Sitharaman that talks are proceeding smoothly over granting of GI tag to Tamil Nadu, his home state.

Pleased to receive this token of appreciation, on behalf of the one-man-committee for granting of the Mysorepak GI tag to Tamilnadu.

Many Kannada news channels though failed to get the joke and began reporting it as real news. They also appear to have created some facts along the way and attacked Sitharaman for entertaining such a request.

I CAN'T BELIEVE THIS. Now another channel has picked it up. Soon they will ask for Ms Sitharaman's resignation. And my head. https://t.co/HQvBSrtdhn pic.twitter.com/VgFz9XLnaC

In the screenshots attached by Ranganathan, TV9 Kannada can be seen running a live news report by questioning Sitharaman over this issue. News18 Kannada on the other hand outright declared that Tamil Nadu has been “silently awarded” the GI tag.

Regional Karnataka news channel Digvijaya News took things to the next level by alleging that Sitharaman has conspired to award the Mysore Pak GI tag to Tamil Nadu despite being elected to the Rajya Sabha from Karnataka. The channel also called her “two faced Nirmala”.

My sweet Kannada brothers n dear @DighvijayNews , did you even think of the authenticity of tweet from @ARanganathan72 before taking it to TV debate?

Pulling Smt @nsitharaman to this level where you call her 'conspiring' of claiming Mysorepak to TN origin?

As the matter began getting out of hand, Ranganathan appealed to South Bangalore MP Tejaswi Surya to stop the spread of misinformation. Surya then promptly acted and called up the news channels to clarify the matter.

Haha. I spoke to the concerned TV channel. They are stopping it now.

Chill for now. And as an aside, accept Mysore Pak is from Mysuru ;)

(P.S. To All - If humor & sarcasm is lost from our public conversations, it will be such a loss) https://t.co/Gnjuhj8rCI

Incidentally, in some real news West Bengal and Odisha were locked in a battle to secure a GI tag for themselves. It later ended in a stalemate when both the states were awarded their own GI tag within a span of two years.