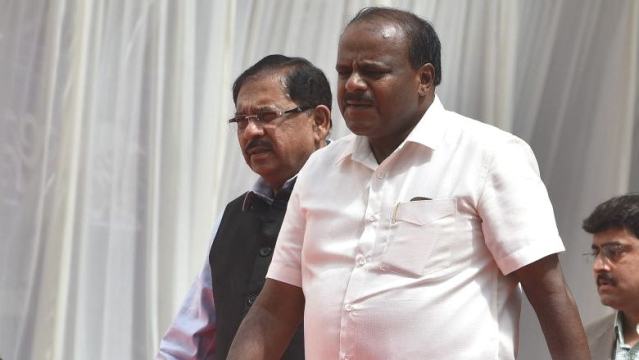 A total of 11 MLAs belonging to the ruling Congress-JD(S) dispensation in Karnataka tendered their resignation on Saturday (6 July), as per state assembly speaker K R Ramesh Kumar, The Hindu has reported.

The speaker while addressing the media claimed that he would look into the resignations on Tuesday (9 June). These letters were submitted by the rebel MLAs to his secretary in his absence from the state secretariat.

The 11 MLAs who are said to have submitted their resignation letters are:

After submitting their resignation, the MLAs headed to the Raj Bhavan to meet with Governor Vajubhai Vala. Besides these 11 MLAs four more Congress MLAs are said to have arrived at the Vidhana Soudha, purportedly to tender their resignations as well.

As a result of this development, Deputy Chief Minister G Parameshwara and State minister DK Shivakumar are set to convene an emergency meeting of Congress MLAs from Bengaluru at 5 PM.

As far as the numbers go, the assembly’s current strength is 224 MLAs excluding the speaker. If 11 ruling MLAs resign the strength comes down to 213, with the half-way mark being 107.

Sans the resignations, the ruling Congress-JD(S)+ combine has 119 MLA which may come down to at least 108. The BJP+ on the other hand has 106 MLAs, which is enough to give sleepless nights to Kumaraswamy and co prior to any potential floor test.