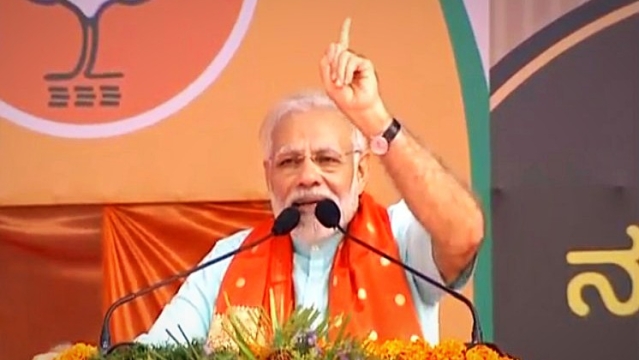 Launching the final leg of the Bhartiya Janta Party (BJP)‘s campaign in Karnataka before the state goes to elections on 12 May, Prime Minister (PM) Narendra Modi today (1 May) went on an offensive against Congress president Rahul Gandhi.

Addressing a rally in Udupi, the PM dared Rahul Gandhi to speak for 15 minutes in Hindi, English or his mother tongue, without looking into a paper. He also called out the Congress’ dynasty politics terming Karnataka elections as a fight between Naamdaars (those who’re significant only due to their name) and Kaamdaars (people who work on the ground).

I challenge you (Rahul Gandhi) to speak for 15 minutes on the achievements of your government in Karnataka without reading from any piece of paper. You can speak in Hindi, English or your mother tongue (Italian) : PM Modi #NammaModi

The PM’s dare comes at the back of Rahul Gandhi’s challenge to let him speak for 15 minutes continuously in the parliament. Notably, the BJP and its NDA allies had protested against continuous Congress-led disruptions of sessions in both Lok Sabha and Rajya Sabha. BJP lawmakers had complained that Congress is not letting the houses function.

In a heart-warming gesture, the people who had gathered for the PM’s rally urged the PM to continue his speech uninterrupted, without a pause for Kannada translation.

The crowd in Udupi urged with cheer to listen to PM Modiâs speech uninterrupted in Hindi, without translation in Kannada. Language is clearly no barrier when it comes to peopleâs love and affection for their leader Shri @narendramodi. #NammaModi pic.twitter.com/sxr0ng437p

PM Modi, along with other BJP leaders also gave speeches in Belagavi and Santhemarahalli later. He talked about several of the central government’s schemes and also accused the Congress of being responsible for murders of RSS and BJP workers in the state.

On the one hand, we are working towards 'ease of doing business' in the country and on the other hand, Congress is busy in enhancing 'ease of doing murder' in Karnataka : PM @narendramodi #NammaModi pic.twitter.com/GFY9HyWLgN

With polls less than 15 days away, the BJP has launched a campaign blitzkrieg in Karnataka. PM Modi will be addressing at least 15 more rallies in the state before the polls with UP Chief Minister Yogi Adityanath to address 34 rallies too.