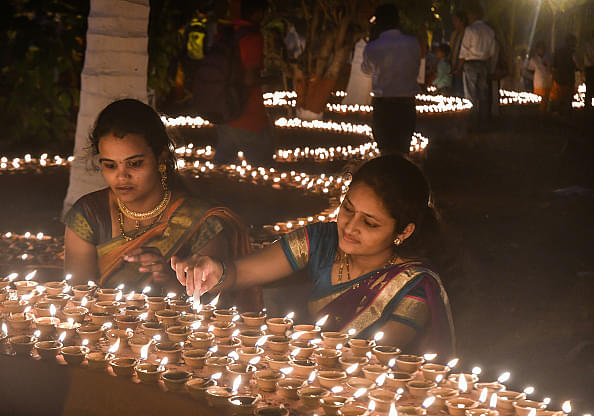 In welcome news for devotees, Karnataka Minister U T Khader on Tuesday (20 November), issued directions to the concerned departments to complete infrastructure projects in the planned time-frame so that the Laksha Deepotsava and Bahubali Maha Mastakabhisheka festivals could be conducted smoothly, reported The Hindu.

Addressing a preparatory meet for Deepotsava and Mastakabhisheka, Khader announced that he had appointed a nodal officer from the government to oversee the infrastructure works. He further discussed various issues like transport and communication, drinking water, security, power supply, etc. with public officials and promised close government cooperation for the celebrations.

Laksha Deepotsava will take place between 2 and 6 December while the Mastakabhisheka will be held within 9 and 18 February.

Previously, Minister for Public Works H D Revanna had assured the widening of the B.C. Road-Ujire National Highway and Periyashanthi-Dharmasthala State highway. Khader has now called for the rapid widening of the Moodbidri-Venur-Ujire and Naravi-Guruvayanakere roads while directing PWD officials to repair the Charmadi ghat at the earliest.

Dharmadhikari of the Dharmasthala temple, Dr Veerendra Heggade invited across-the-board cooperation to make the programmes successful this year, stating that the temple did not discriminate against anyone on religious, caste or class lines.

The town is known for its Dharmasthala Temple which houses the shrine of Shiva, Manjunatha, Ammanavaru, the Tirthankara Chandraprabha and the Jain guardian spirits of Dharma — Kalarahu, Kalarkayi, Kumaraswamy and Kanyakumari. The temple sees about 10,000 pilgrims a day.

The temple is unusual in that it is run by a Jain administration and poojas are conducted by Hindu Vaishnavaite priests of the Madhva order. Lakshadeepa, the festival of lights, is the annual festival of Dharmasthala.