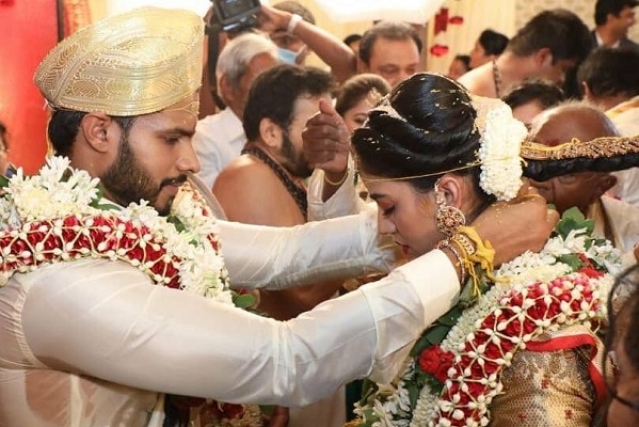 The report states that more than 100 people participated in the marriage ceremony held at Kumaraswamy’s farmhouse in Ramanagara, outside Bengaluru.

Among the attendees, there were around 50-60 members from former Prime Minister HD Deve Gowda’s family and more than 30 people participated from Revathi’s family.

The marriage venue was shifted to farmhouse due to the coronavirus lockdown and Kumaraswamy had vowed to follow all norms to contain the spread of covid-19.

The photos of the wedding shows that people did not wear mask or gloves and flouted social distancing norms, states one IndiaTV report.

It should be noted that prior to the marriage, Karantaka’s Deputy Chief Minister Ashwath Narayan had stated that action will be taken against Kumaraswamy if guidelines were not followed.

“Kumaraswamy has made a public statement that guidelines will be followed. He is a people representative. He’s in public life for a long time. He should abide by guidelines. Since he’s in responsible position for a long time, he was Chief Minister of Karnataka, he’s also an MLA from Ramnagar, so guidelines must be followed in his son’s marriage as per the rules amid Covid-19 scare.

After the marriage there must not be any excuses, he can’t say that people came without invitation,” Narayan had reportedly said.