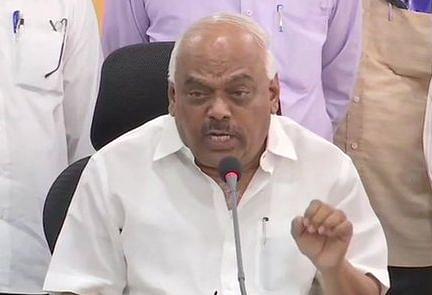 Karnataka Speaker K R Ramesh Kumar has disqualified 14 MLAs, barring them from the Assembly for its remaining term, reports ANI.

Among the disqualified, 11 MLAs are from the Congress party and remaining are from JD(S). With this, the total number of disqualified MLAs stands at 17. On Thursday, two Congress MLAs and one independent--Ramesh Jarkiholi, Mahesh Kumatalli, and R Shankar.

The MLAs disqualified today are:

Even after the disqualifications, BJP is likely to form a government in the state as it has support of 105 MLAs while the magic number of majority stands at 104.

The Speaker became emotional and said, "The way I am being pressured to deal with these as the Speaker has pushed me into a sea of depression. Now I have come to the decision." He added that the disqualified MLAs will not be able to contest elections until the expiry of the term of the 15th assembly.

The BJP condemned Speaker’s decision. AS Patil Nadahalli, BJP leader, said, "Speaker's decision is illegal and undemocratic. The MLAs met him and gave the resignation. Their signatures were voluntary and genuine. This is a dark day for Karnataka politics."