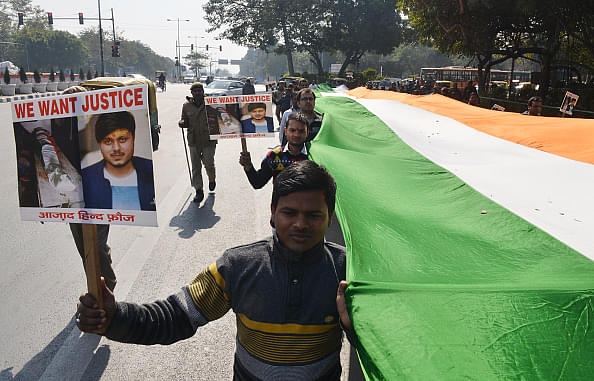 Youth protests in New Delhi in February 2018 against the killers of Chandan Gupta, who lost his life in Kasganj violence (K Asif/India Today Group/Getty Images)

The letter, a copy of which is with Swarajya, seeks permission to hold a Tiranga yatra on the upcoming Republic Day. It also draws attention towards the state government’s unfulfilled promise to build a ‘Chandan Chowk’ in memory of his brother.

In his letter, Gupta writes that he and others had applied for permission to carry out a Tiranga yatra on Independence Day earlier as well, but officials had denied them permission. Their request is reportedly not being heeded this time too.

Gupta told Swarajya that he is yet to receive responses for his previous letters.

Gupta said that the Tiranga yatra last during last year’s Republic Day was not a first. “The yatra was being taken out for at least last eight years in the city on the Independence Day and Republic Day, and there was never an issue with that,” he said.

“There was also never an issue of taking any permission. It was only last one year that we had to seek a permission to carry out the yatra”, he added.

He said that government officials refuse permission claiming that they do not have approval from their superiors. Last year, security was also beefed up across the city to maintain law and order.

The denial of permission is not the only point of grievance for Chandan Gupta’s family. Not only the promise of ‘Chandan Chowk’ but also a government job to a member of the family has not been fulfilled yet. There is also the issue of compensation.

“Our family got 20 lakh in compensation, whereas the person whose shop was burnt in the violence got 22 lakh. Our child’s death is therefore worth less than a burnt shop,” Gupta told Swarajya.