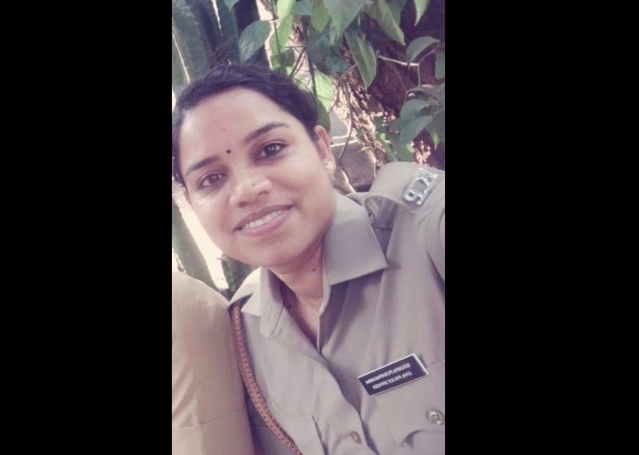 Soumya Pushpakaran, the lady cop who is one of the recent victims of broad day light killings in Kerala(pic via Twitter)

Ajas, a traffic police officer at the Aluva station in Kerala, who brutally hacked and set ablaze a woman cop to death in Vallikkunnu, confessed about his crime to the magistrate before he succumbed to severe burns sustained while committing the crime, reports Mathrubhumi.

Ajas said that he killed the lady cop Soumya Pushpakaran, mother of three, as he was frustrated upon being rejected over his marriage proposal to her -- in a statement given to the magistrate.

Soumya, who was working in the Vallikkunnam station as a Civil Police Officer, was returning home after appearing in a departmental examination when she was knocked down from her scooter by a car driven by Ajas, who came out and ran towards her with a machete.

As she ran towards a nearby home for safety, Ajas chased and hacked Soumya with the weapon. Ajas then poured petrol over the horrified Soumya and set her ablaze. Ajas was suspended from the service after the incident.

While Soumya died on the spot, Ajas sustained 50 per cent burns in the incident. He was undergoing treatment at the Alappuzha medical college for the past four days. With his kidneys being affected, Ajaz was undergoing dialysis and died on Wednesday as his condition worsened.

Soumya is survived by three young children and her husband, who works in the Gulf. Ajas, an unmarried man, had known Soumya for some time and was constantly pursuing her despite the lady cop being married and rejecting his advances.