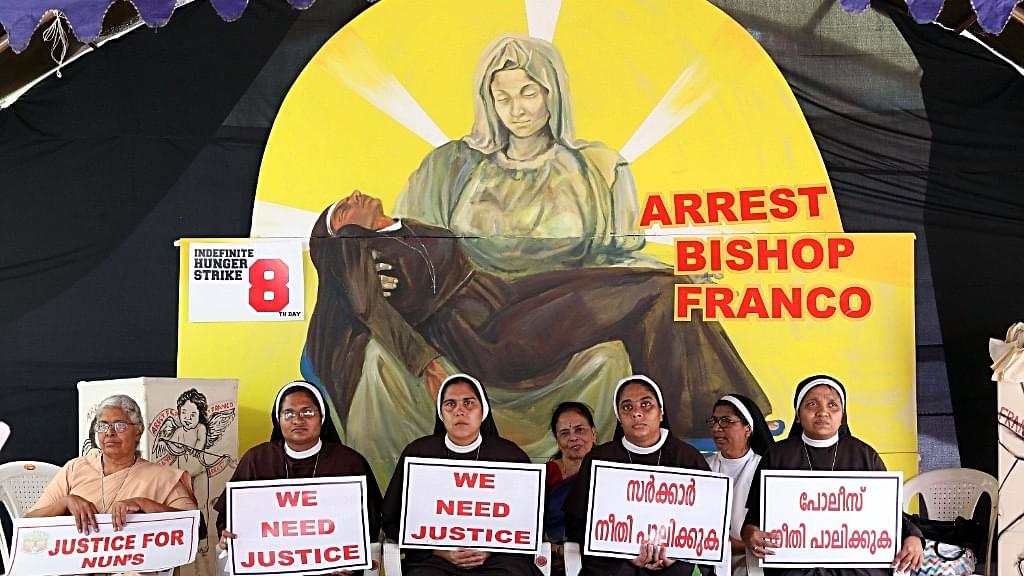 Nuns hold placards during a protest demanding justice after an alleged sexual assault of a nun by a bishop. (Vivek Nair/Hindustan Times via Getty Images)

After rape-accused Bishop Franco Mulakkal got arrested by the police and the Magistrate court rejected his bail application, the Kerala Catholic Bishops' Council (KCBC) condemned the arrest, reports Mathurbhumi.

In a press release, the KCBC said that the arrest of the Bishop was painful. The council has also rejected the claims of the nun who accused the Bishop of sexually abusing her. They have also denounced the protests staged by nuns to ensure justice for the victim.

KCBC said that the protest by the nuns was a conspiracy to undermine the practices and hierarchy of the Catholic order. The priest and nuns violated the Catholic laws and order by indulging in the protest. The protest cannot be justified no matter what the cause is, reported in the press release.

The Bishop's body who rebuked the nun said that they would not take a position on the accused Bishop until he is proven guilty. The case had invited national attention because of the inaction of the Kerala police and the support for the Bishop by the church for months. The church is facing a crisis over allegations of rape at a global level. Earlier in the month, over 44,000 Catholic women had written to the Pope over a ‘sexual abuse crisis’ in the church.

The Vatican had temporarily suspended the accused Bishop following a letter from the victim and widespread protests across the country.