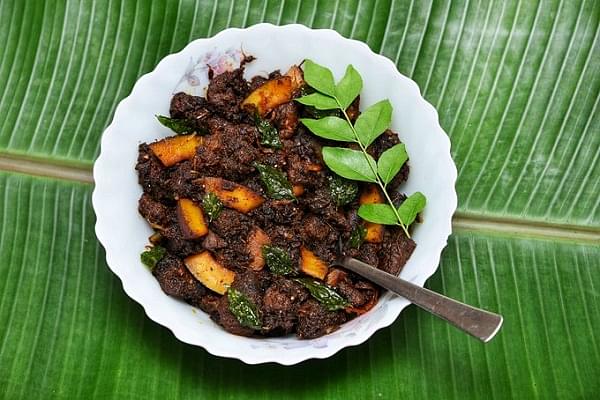 The Kerala tourism on Wednesday (15 January) courted controversy after promoting a beef recipe named Ularthiyathu which it described as “a stuff of legends from the land of spices”.

Tender chunks of beef, slow-roasted with aromatic spices, coconut pieces, and curry leaves. A recipe for the most classic dish, Beef Ularthiyathu, the stuff of legends, from the land of spices, Kerala: https://t.co/d7dbgWmlBw pic.twitter.com/aI1Y9vEXJm

This drew sharp reactions from many social media users who questioned the need to promote the recipe on a day when millions of Hindus would be celebrating Makar Sankranti, Makara Vilakku in Sabarimala and Pongal.

Time & Time again, u hav proven that u hav Zero Common Sense, @KeralaTourism.

If not Sense, at least, hav some Sensitivity.

On the auspicious day of 'Makara Vilakku', is this the best ur creative team cud come up wth?

Even as we Tamils celebrate Pongal venerating our livestock,@KeralaTourism puts up this advertisement just to hurt our cultural sentiments. Clearly Hate-filled and uncultured. Happy we of Kanyakumari chose cultured Tamil Nadu and not these degenerate hate-peddlers. https://t.co/0Z81aUbBfV

Shame on you for this repulsive tweet on a Hindu holy day.

Recently Kerala tourism was in the news after its state guest Noble laureate Michael Levitt was virtually held hostage along with his wife by Kerala’s trade union members during their Bharat Bandh.

Levitt who is currently the professor of structural biology at the Stanford University in the US, was on a holiday in Kerala’s Alappuzha and was stopped by the trade unionists near Kainakary.

Levitt later recounted the incident by claiming that the whole experience was like being held on gunpoint by a bandit, “being stopped by criminals on the backwaters sends a very bad message to tourists. It is as if a bandit stopped us at gunpoint and delayed us under the threat of force for one hour”.