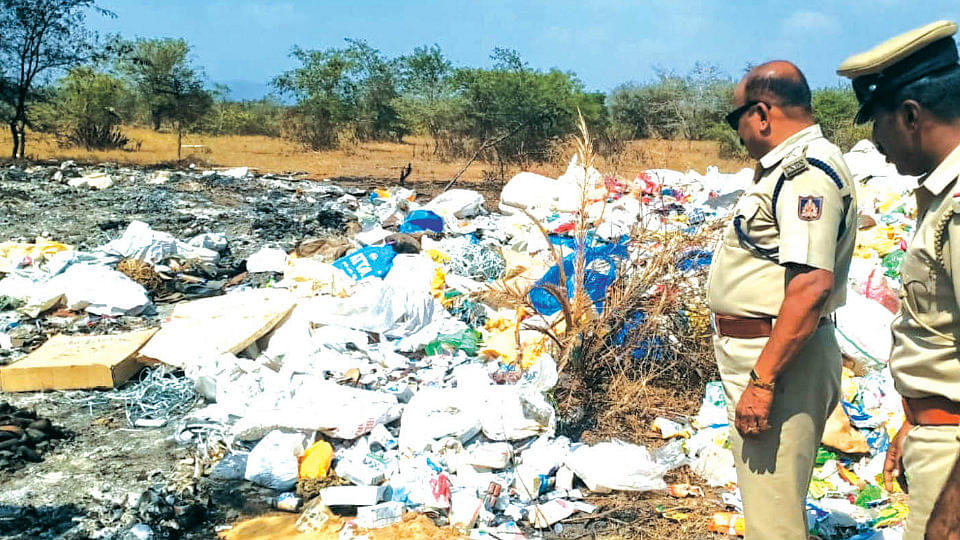 At a time when Mysuru is vying to bag the top place in the Cleanest City ranking under Swachh Bharat Mission, trucks from Kerala continue to dump waste including hazardous medical waste on roadsides, especially in the areas that border Mysuru City Corporation and the Mysuru District.

The hazardous garbage in the form of bio-medical waste is being dumped unabated and this is threatening the health of local residents. On Tuesday (28 January), an alert team of district police seized two trucks with bio-medical waste and two persons were arrested at Adakanahalli Industrial Area in Nanjangud taluk.

The arrested have been identified as Afzal Muneer and Syed Mohammed. Their accomplices Kabir, Shoaib and Muneer are absconding and efforts are on to trace them. It was found that the accused transported the loads of bio-medical waste from Kozhikode and they have earlier dumped eight to 10 similar loads in the vicinity.

Superintendent of Police (SP) C B Ryshyanth told reporters that two trucks from Kozhikode in Kerala entered Mysuru late at night and were about to unload the medical waste on Government land around Adakanahalli Industrial Area when the Police intervened. The trucks crossed the check post in Nanjangud at around 3:30 am and the Police followed the trucks and caught the two occupants when they were trying to unload the medical waste.

Though complaints of dumping of waste from Kerala in Mysuru had been made earlier also, the SP said that the Police had managed to catch the accused red-handed involved in the dumping of medical waste after setting up a check post at Nanjangud that is manned 24×7.

The accused will be booked under provisions of Motor Vehicles Act, 1988, for transporting medical waste without proper documentation as well as for environmental degradation under the anti-pollution laws.

It may be recalled that the Mysuru City Corporation officials had seized a couple of trucks which were dumping waste transported from Kerala. Also, similar seizures were reported in Gundlupet, Chamarajanagar.