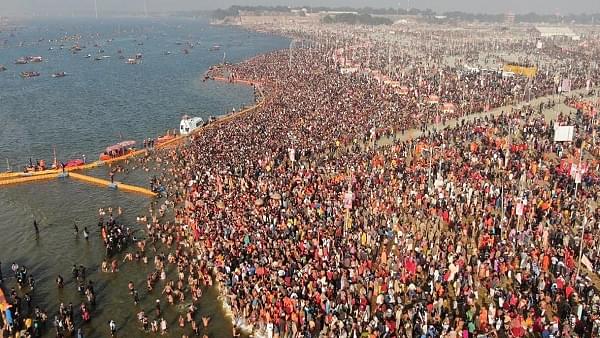 Braving the cold and fog, over 1.81 crore pilgrims took a holy dip in the Sangam, the confluence of Ganga, Yamuna and Saraswati, in the early hours of Monday (4 February) on the occasion of Mauni Amavasya in Prayagraj, Uttar Pradesh, as reported by The Tribune.

According to the report, lakhs of people started arriving at the Kumbhnagar from Sunday (3 January) to take a dip on the occasion of Mauni Amavasya. Many religious leaders and spiritual gurus along with their disciples also participated in the third Shahi Snan (Royal bath) of Kumbh.

Adequate security arrangements had been made by the police in and around the site of Kumbh, Prayagraj, Inspector General of Police Mohit Agarwal was quoted in the report as saying.

As per the report, the Kumbh Mela administration had made elaborate arrangements for the occasion and prepared a time table for the holy dip. As per the time table, Panchayati Akhada Mahanirvani was the first to go to the rivers and take a dip at 6.15 am.

Uttar Pradesh Deputy Chief Minister Keshav Prasad Maurya was also among those who took an early morning dip in the holy sangam.