Kunal Kamra Again Tries To Harass Arnab On A Return GoAir Flight, Also Gets Banned From That Airline 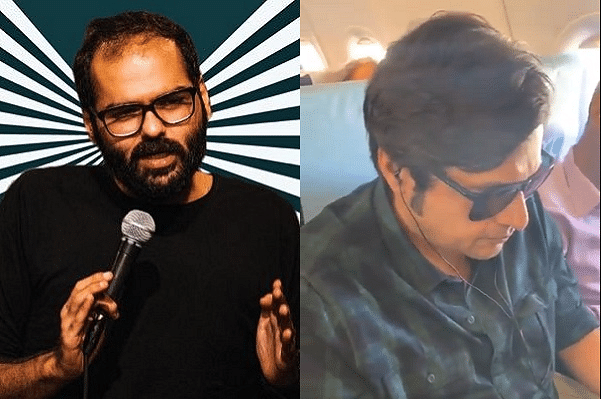 Controversial comedian Kunal Kamra on Wednesday (29 January) claimed that he met journalist Arnab Goswami again on a Lucknow-Mumbai flight, a day after harassing the Republic TV editor-in-chief on board a Mumbai-Lucknow Indigo airlines flight.

Kamra, who has been barred by many airlines following the incident, claimed that Goswami was on his flight again on Wednesday morning (29 January) while returning from Lucknow.

Stand-up comedian Kunal Kamra claims he once again approached journalist Arnab Goswami, who he said was his co-passenger on a flight from Lucknow, for 'honest discussion' but was turned away

As per an OpIndia report, both Arnab and Kamra were travelling on a GoAir flight back to Mumbai. When he saw Arnab at the boarding gate, he began hounding him again. He is also said to have boarded the same bus as Arnab to reach the aircraft while repeatedly asking him to “answer him”. Arnab is then said to have asked him to back off.

Now GoAir too has banned Kamra from flying the airline until further notice.

Earlier on Tuesday (28 January), Kamra himself had posted a video in which he could be seen harassing Arnab and repeatedly trying to provoke him by calling him a coward. However, Goswami maintained a dignified silence during the incident.

After an outrage over the incident that could have endangered the safety of other passengers, Indigo suspended Kamra from flying with the airline for a period of six months.

After Puri’s advise, other airlines including Air India and Spice Jet too suspended Kamra from flying with them.