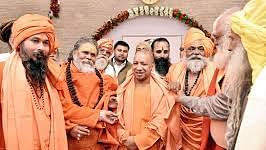 Mahant Narendra Giri, President of the Akhil Bhartiya Akhara Parishad (ABAP), the apex body of saints and seers, has said that lakhs of Naga sanyasis would not hesitate in joining the Indian armed forces to give a befitting reply to the Chinese aggression on the borders.

Condemning the attack, Giri said the Indian forces are capable of giving a befitting reply to the enemy, but if the need arises, lakhs of Naga sadhus can also join their forces to protect the motherland.

"They once functioned as a trained armed force to protect Hindus from the Mughal rulers and were involved in a number of military defence campaigns. However, after Independence, there was no apparent need for Nagas to indulging in armed activities, so they turned to religion," he explained.