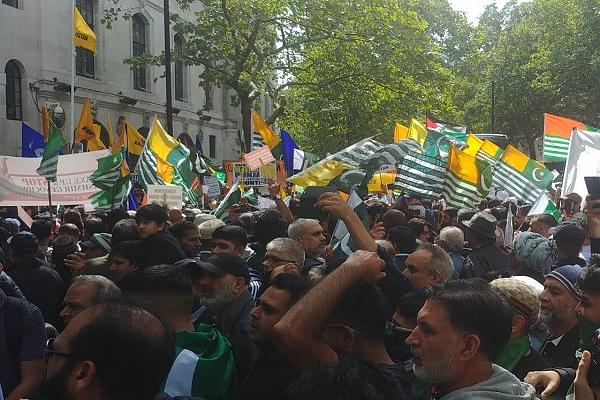 Demonstrators outside the Indian mission with Pakistani and PoK flags. (Pic via Twitter)

A protest against the revocation of Jammu & Kashmir’s special status organised by British Pakistanis and Khalistani separatists outside the Indian High Commission in London turned violent yesterday (15 August), with members of the Indian diaspora who were peacefully celebrating Independence Day being pelted with eggs, glass bottles and shoes, reports The Times of India.

Even though police personnel tried to physically put themselves between the violent demonstrators and the Indian side to protect the latter group, a few people were still injured by the objects thrown at them.

Many of the Indian families who were there to celebrate Independence Day had to wait for hours along with their children before riot police were able to clear a safe route for them.

London authorities under Mayor Sadiq Khan were criticised for not being adequately prepared when they knew that the situation could spiral out of control.

“It is very sad that law and order has failed in London. When Trump said it was failing, he was right. I blame London mayor Sadiq Khan for this absolute failure. They knew how many protesters were coming. They should have banned some of them. We have seen nothing but violence, intimidation and abuse,” said Jay Shah, ember of the Friends of India Society International.

The protest seems to have been meticulously planned, with busloads of protesters being brought in to near the site of the demonstration from a number of English towns.