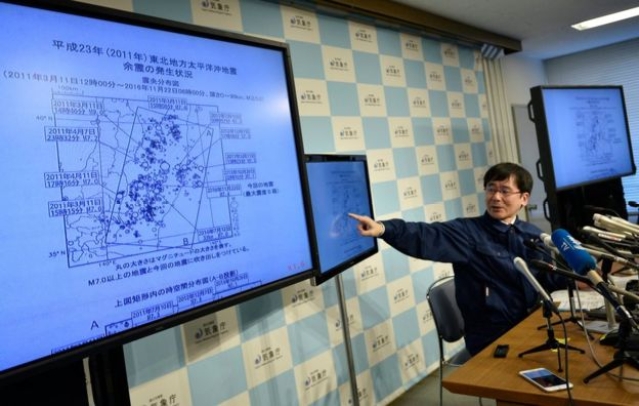 An earthquake with a preliminary magnitude of 7.4 struck northeastern Japan's Fukushima today (22 November), a weather agency said, while tsunami waves were observed in the area, where two persons were injured. The quake registered lower five on the Japanese seismic scale of seven in northeastern Fukushima, Xinhua quoted the Japan Meteorological Agency as saying.

Tsunami evacuation orders were issued in areas including Fukushima, Miyagi, Iwate, Aomori by the weather agency, as the first wave of tsunami was observed at the coastline 20 km east of Iwaki city in Fukushima and then 1.4-metre wave of tsunami was observed in Sendai in northeastern Miyagi after the quake. The weather agency also warned of further tidal waves of up to three metres for Fukushima and one metre for other parts of the coastline facing the Pacific.

Two elderly men were injured in Fukushima, with one struck by falling tableware at home and the other cut by broken glass at a nursing home.

The epicentre of the quake was at a latitude of 37.3 degrees north and a longitude of 141.6 degrees east and occurred at a depth of 10km, said the weather agency. The temblor was centred in waters offshore of northeastern Fukushima, which borders the Pacific Ocean and is to the northeast of the nation's capital city of Tokyo.

The jolt, centred in Fukushima, could be felt in central Tokyo and other northeastern Japanese prefectures including Tochigi and Ibaraki. In addition, Shinkansen train services were partially suspended in eastern Japan and power outage affected at least 1,100 households in Fukushima and central Niigata.

An earthquake and tsunami struck the same area in 2011 killing more than 18,000 people. That quake, one of the most powerful ever recorded, also caused a meltdown at the Fukushima nuclear power plant, where a massive clean-up operation is still going on.