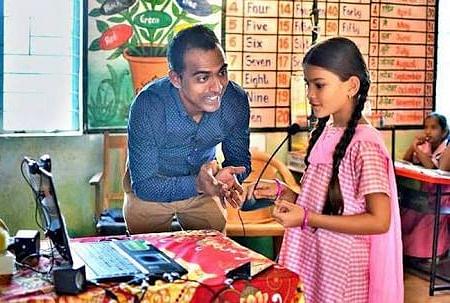 Ranjitsinh Disale was picked the winner on 3 December amongst the shortlisted 10 teachers from around the globe in London, United Kingdom.

He noted about this school that it was in a dilapidated building, sandwiched between a cattle shed and a storeroom. Most of the girls were from tribal communities that didn’t prioritise female education, and teenage marriage was common. Additionally, the textbooks were not in the students’ primary language, Kannada.

Disale, with a great deal of effort, learnt Kannada. and redesigned all the textbooks for classes I to IV for better understanding of the children.

“The impact of Disale’s interventions has been extraordinary. There are now no teenage marriages in the village and 100 per cent attendance by the girls at the school. The school was also the best school in the district with 85 per cent students receiving A grades in annual exams. One girl from the village has now graduated from the university, something seen as an impossible dream when Ranjitsinh arrived,” notes the official website of Global Teacher Prize.

Disale reportedly wants to share 50 per cent of the prize money with the remaining nine finalists. He also plans to launch an initiative under which 5,000 students from war affected countries are recruited into a ‘peace army’.