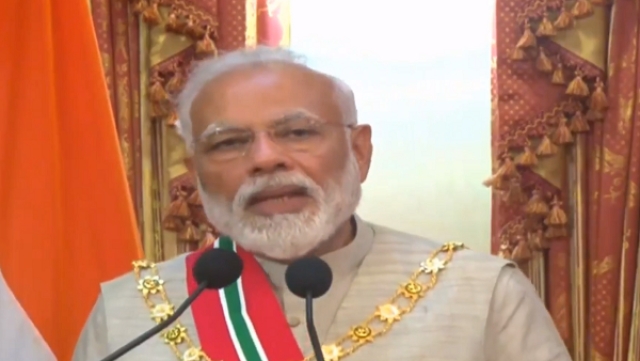 Prime Minister Narendra Modi today (8 June) landed in the Maldives for his first official visit abroad after the ruling NDA was re-elected to power in the Lok Sabha elections. He received a ceremonial welcome and was met upon arrival by the Foreign Minister of Maldives Abdulla Shahid at Velana International Airport in Malé , reports India Today.

During his visit, the prime minister met with the President of the Maldives Ibrahim Mohamed Solih, and gifted the latter a bat signed by the Indian Cricket Team, which is currently playing in the ODI World Cup.

Solih conferred upon Modi the country’s highest award that can be accorded to foreign dignitaries, ‘The Most Honourable Order of the Distinguished Rule of Nishan Izzuddeen’.

The purpose of the prime minister’s visit to the Maldives was to strengthen bilateral ties with the island nation; Maldives had drifted away from India and closer to China under the rule of the previous president Abdulla Yameen but has returned to closer cooperation with its South Asian neighbour under the Solih administration.

Under Modi, India has sought closer defence and maritime relations with the Maldives, which is key to strengthening security in the Indian Ocean Region.