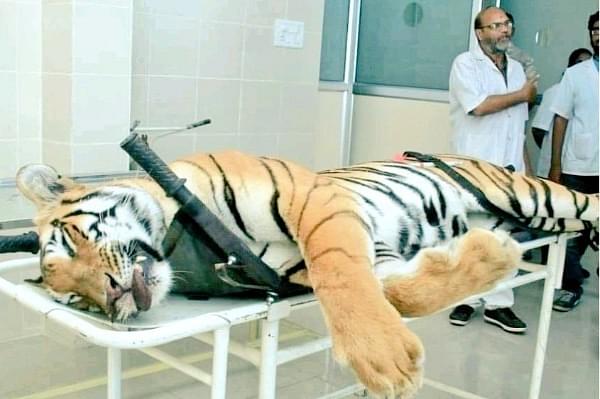 Avni, a man-eating tigress which is alleged to have mauled and killed at least 13 people, was shot dead in Maharashtra’s Yavatmal district on Friday night, the state police said on Saturday (3 November), says a media report.
The tigress, officially identified as T1, was ordered to be shot at sight by the Supreme Court, which dismissed the petition of animal rights activists last month. Even after the SC order, the activists continued a high-voltage campaign to save Avni, including pleas to the President of India to intervene apart from protest meetings across the country.

The announcement on the tigress’ killing was greeted with cheers by forest dwellers. They burst fire crackers and smeared themselves with colour after forest officials announced the killing of the big cat.

According to Maharashtra Forest Department officials, Avni consumed 60 per cent of human bodies and met all criteria to be classified as a man-eater. However, animal rights activists refute the contention and claim that all the human deaths attributed to Avni took place in areas where humans encroached upon forest land.

Police said the tigress was shot by sharp shooter Asghar Ali, who hails from the Hyderabad royal family.  Officials are looking for its cubs, which would be relocated to a sanctuary, sources said.

Activists have questioned the involvement of private hunters Asghar Ali and Nawab Shafat Ali in the operations, alleging they were trigger-happy shooters and had a fetish for killing big cats. They criticised the government for assigning private hunters instead of an expert, who could tranquilise the tigress.