Oil Spill Off The Coast Of Chennai: Here’s What We Know So Far 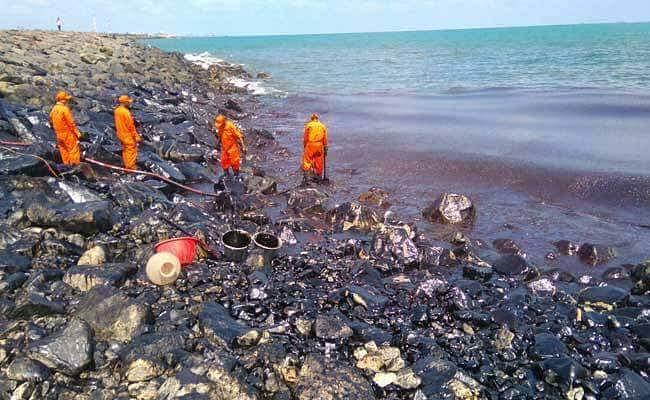 Workers cleaning up sludge from the oil spill in Chennai (Twitter)

A week after two ships collided near the Kamarajar Port in Ennore, around 21 km north of Chennai, the sludge from the resulting oil spill has spread to Chennai city, adversely affecting its marine economy and aquatic life. Around 150 workers of the Corporation of Chennai have been working on clearing out the layers of oil from Marina beach.

Environmentalists have raised concerns about the adverse impact of oil spills on marine life and ecosystem. And members of the opposition Dravida Munnetra Kazhagam (DMK) have hit out at the government for being slow with cleaning up the mess.

The spill has also impacted the livelihood of many fisherfolk in the vicinity. While those who went out to deep sea to catch fish were largely unaffected, those practising shallow fishing in and around the coast have been affected drastically. The spill will damage fishery resources in the affected area, and the economic cost is expected to mount further.

Experts believe that the spill will adversely affect the fishing community because the fish will not return to areas affected by the oil spill for months to come. The impenetrable layer of oil cuts the supply of sunlight and oxygen to the water, preventing the growth of phytoplanktons that most aquatic animals feed upon.

Animals that come to the surface of the water, such as turtles, will be directly affected. The carcinogenic nature of the oil is also a cause of concern because, through biomagnification, cancer-causing agents will find their way into our food chain.

Environmentalists have blamed the government for not taking necessary steps to contain the oil spill and prevent it from spreading. "The spill will affect oxygen supply to aquatic species. More species will die. But we are not able to assess the loss as we don't have a base line," said Emily Titus, an environmentalist.

According to media reports, the clean-up process will take three more days. According to NDTV, employees from the firefighting department, port offices, Highways and Chennai Metro Water are also participating in the clean-up. A helicopter and a pollution-fighting coastguard ship have also joined the operation today.

Students from local colleges have taken this as an opportunity to study the effects of oil spills on aquatic life and economy. A group of students and teachers from Anna University are mapping the spill using unmanned aerial vehicles. “Through the analysis we could locate the spill areas and decide on effective measures,” K Senthil Kumar, director, Centre for Aerospace Research, was quoted by NDTV as saying.