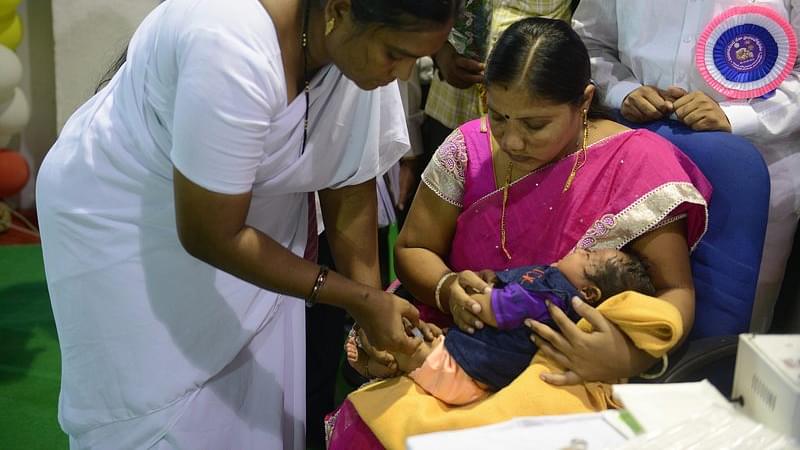 Even as the Government of Kerala continues to work on increasing awareness on administering Measles-Rubella (MR) vaccination to children, anti-vaccination campaigners (anti-vaxxers) continue to create hurdles.

The latest of such incidents took place at an MR vaccination drive at the Athippatta GLP School in Edayoor panchayat in Malapuram. Anti-vaxxers forced their way into the school and manhandled a nurse named Shyamala by twisting her hands, reports The News Minute. Shyamala suffered a fracture due to the attack. The police later arrested three men – Mubasheer, Safan and Faisal Babu – and charged them under various sections of the Indian Penal Code (IPC). Edayoor Public Health Centre medical officer Dr Ali Mohammed told reporters that the men were armed with knives and threatened to kill them if the vaccination drive wasn’t stopped.

The reason behind the attack is is disputed story in itself. While the police have claimed that the drive took place without the consent of the students, the medical staff have a different story to tell. Deputy District Medical Officer Renuka told reporters that the attack was due to messages being spread that the vaccination drive was being done to reduce the Muslim population and that the protein being used was synthesised from pork, considered haram by Muslims.

However, this isn’t the first time anti-vaxxers, especially from the Muslim community have disrupted vaccination drivers in India, often through violent means.

Islamic Outfits in Kerala have been indulging in propaganda that vaccines are haram and forbidden by Islamic law. A widely disseminated video clip in which a Muslim cleric delivers a fiery speech warning his faithful followers of on the immense harm caused by a vaccines at a public meeting went viral. "A human being gets all the protection he or she needs in the womb before birth,” he thunders, “Vaccination is simply not required”.

Angry Muslim mobs took immunisation workers hostage and thrashed them for ”forcibly” administering medicines to children claiming that it was an attempt to suppress their fertility and check the Muslim population.

In May, rumours that a vaccination drive was administering “RSS vaccine” in Assam kept students away from school. Parents refused to send their children to school claiming that students were forcibly being vaccinated by the Rashtriya Swayamsevak Sangh (RSS).

The rise of anti-vaxxers in Muslim dominated areas in India follows a disturbing trend similar to that of the United States where propagandists, mostly Christians claim that vaccination causes autism. Unlike other aspects of faith, lack of vaccination not only risks the life of the unvaccinated child, but also puts others at risk.