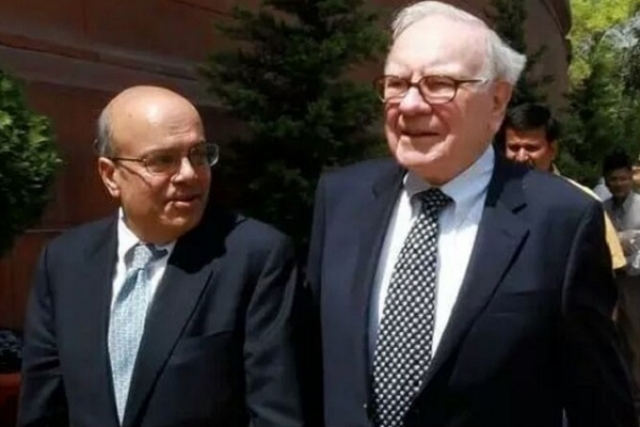 Ajit Jain, an IIT Kharagpur graduate from Odisha, is one of the likely successor to Warren Buffet at his $522 billion Berkshire Hathaway empire. Jain looks after the insurance business of Berkshire Hathaway, reports Money Control.

Jain, who had graduated from IIT Kharagpur with a B-Tech degree joined IBM in India before settling in the US to get his MBA from Harvard.

There has been an ongoing debate surrounding the imminent successor to Buffet at Berkshire Hathaway. The discussion came back to life again after the "Oracle of Omaha" indirectly answered questions on the succession during AGM on the 4 May.

Buffet, 87 now, is the chairman of Berkshire Hathaway which partially or wholly owns a lot of other corporations as well. Charlie Munger, 95, is the vice chairman.

At the AGM, Buffet picked out both Ajit Jain and Greg Abel and complimented them on their accomplishments.

Buffet called both Abel and Jain's accomplishments as "fantastic”. He said that the two of them would "in the near future" join him and Munger in responding to shareholder questions.

Jain had joined Berkshire Hathaway's insurance business during the 1980s when he said he knew very "little about insurance".

He must have been a fast learner because under his watch, not only did the insurance business grow under him, it grew rapidly while also playing a vital role in Berkshire’s investment float.

Primarily, the returns produced by Buffet’s firms were not only because of the Oracle’s legendary stock-piling skills, but were also magnified by the leverage generated by the low-cost ‘float’ generated by Jain’s insurance business.

Buffet holds Jain in high regards and this showed even in his shareholders letters where he says, “ Charlie, I and Ajit are in a sinking boat, and only one of us can be saved, swim to Ajit".

In a letter written in 2014, to the company board, Buffet had mentioned, “Both the board and I believe we now have the right person to succeed me as CEO – a successor ready to assume the job the day after I die or step down. In certain important respects, this person will do a better job than I am doing."