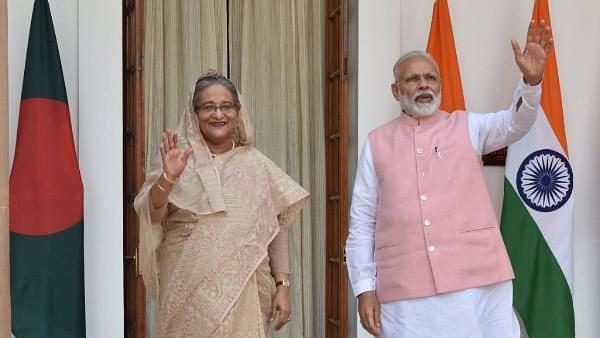 Modi announced a new concessional line of credit of $4.5 billion for development projects in priority sectors, tweeted external affairs ministry spokesperson Gopal Baglay. The Prime Minister also reportedly announced $500 million of credit for defence procurement in the country and a cooperation between the armed forces of the two countries.

In addition, the two leaders inaugurated two rail and a road connectivity project via video conferencing. The trial run of passenger train service between Bangladesh’s Khulna city and Kolkata, West Bengal, began today with the arrival of a train at Petrapole here along the Indo-Bangla border. The Kolkata-Khulna-Dhaka bus service was also inaugurated, in addition to the Radhikapur-Birol rail link.

On the sticky subject of the much-delayed Teesta water-sharing pact, Modi said an "early solution can and will be found", reported Press Trust of India.

The two leaders also released the Hindi translation of founding leader of Bangladesh Sheikh Mujibur Rahman’s The Unfinished Memoirs. Referring to him as a “dear friend of India,” the leaders announced that a road in Delhi will be dedicated to his memory.

Commemorating an extraordinary figure & honouring #IndiaBangladesh friend'p. The leaders dedicate a road in Delhi to memory of Bangabandhu

Prime Minister Modi also wished the people of Bangladesh for the upcoming new year and noted that Hasina’s visit marks a golden era in India-Bangladesh friendship. Praise was also directed towards the Bangladeshi leader for her “zero tolerance” for terrorism.

Hasina, who arrived in India yesterday (7 April) on a four-day trip, will reportedly visit Ajmer on Sunday and meet business leaders on Monday.