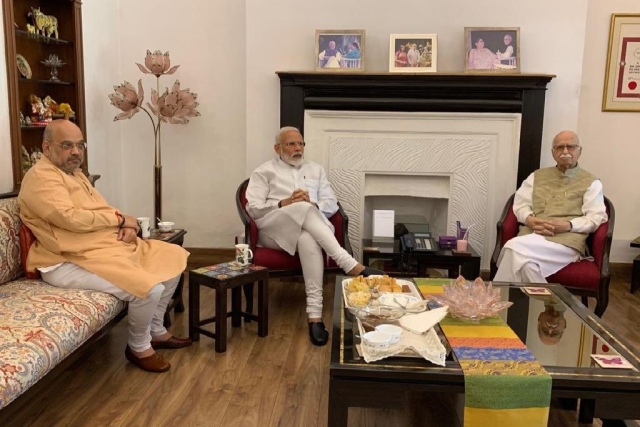 PM Modi informed about the meeting in a tweet. The Prime Minister, who was accompanied by the BJP President Amit Shah, credited all the successes of the BJP to Advani and other great leaders who laid the foundation of the party.

“Called on respected Advani Ji. The BJP’s successes today are possible because greats like him spent decades building the party and providing a fresh ideological narrative to the people,” PM Modi said in a tweet.

Called on respected Advani Ji. The BJPâs successes today are possible because greats like him spent decades building the party and providing a fresh ideological narrative to the people. pic.twitter.com/liXK8cfsrI

PM Modi, in a tweet, praised Dr Joshi as a scholar and intellectual par excellence and said that his contribution towards improving Indian education is remarkable.

He also said that the veteran BJP leader always worked to strengthen the BJP and also mentored several Karyakartas, including PM Modi himself.

Dr. Murli Manohar Joshi is a scholar and intellectual par excellence. His contribution towards improving Indian education is remarkable. He has always worked to strengthen the BJP and mentor several Karyakartas, including me.

Met him this morning and sought his blessings. pic.twitter.com/gppfDt7KiB