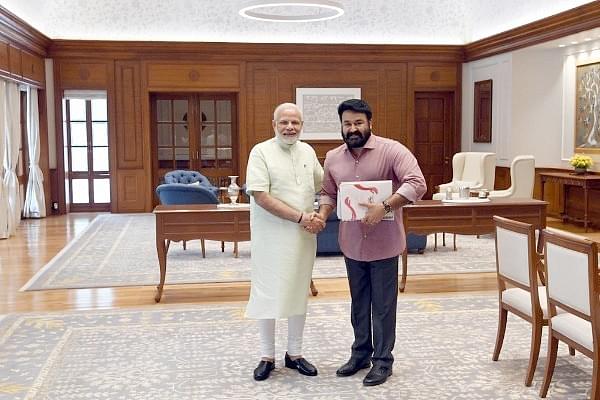 In his latest blog post titled ‘MODIfied Waves’, Malayalam actor Mohanlal has shared his thoughts after meeting Prime Minister Narendra Modi . The actor, who occasionally writes on personal as well as socio-economic issues in his blog named The Complete Actor, shared details of his meeting with Modi.

The meeting between Mohanlal and Modi had triggered speculations about the Malayalam superstar’s entry into Kerala politics.

Mohanlal’s post, however, elaborates and stays centred to the meeting and says that it had nothing to do with politics. The actor added that the meeting was in the context of the activities of the actor's ViswaSanthi Foundation, a charitable organisation which he started as a tribute to his parents.

In the blog post, the actor said that he continues to feel Prime Minister Modi’s positive energy even three weeks after meeting him. He is also reported to have said that the Prime Minister is the most patient listener he has ever met.

“Even three weeks after meeting Prime Minister, I still feel his positive energy. He is the most patient listener I have met in my entire life. He listened patiently to everything that I said,” he said, according to the Financial Express.

Mohanlal said the Prime Minister spoke about a range of topics, including his work, but did not talk about politics during the meeting.

“The most interesting thing about our meeting is that we didn’t talk about politics at all…I briefed the Prime Minister about the Sanskrit one-act play that I had acted in ‘Karnabharam’ and about the honorary rank that I hold as the Lieutenant Colonel in the Territorial Army of India. The Prime Minister spoke about a range of topics but nothing related to politics,” the actor wrote.

He also noted that the Prime Minister is aware of the minutest details about Kerala and supports initiatives for the betterment of the state.

“It amazed me that the he is aware about even the smallest details pertaining to Kerala. He made it clear that his support is always there for any initiative that relates to Kerala. When he spoke, he came across as a citizen who is working on several good initiatives. That appealed a lot to me,” he said.