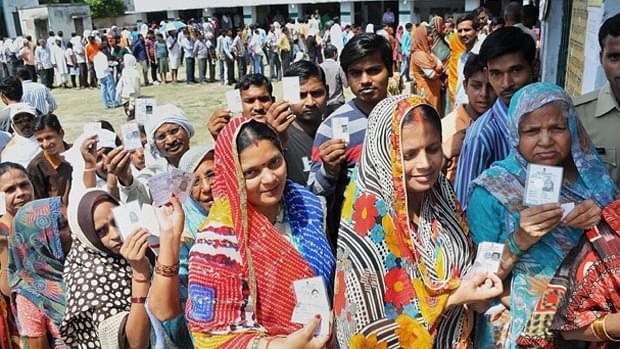 Voters queue up for casting their ballots on the last day of polling.

High-Voltage Elections End: All Eyes On Day Of Results: The two-month long assembly elections in five states ended on Wednesday, with all eyes on the 11 March results. Over 60 per cent turnout was recorded in the last phase in UP, taking the voting percentage to nearly 61 in the staggered elections for 403-member assembly. Manipur witnessed a turnout of about 86 per cent in the second phase today with an overall voting percentage of 85 for 60-member House. Elections were also held in Punjab, Uttarakhand and Goa. Exit polls will be released today.

Modi To Launch New Start-Up Programme For Women: Prime Minister Narendra Modi is set to launch a focussed start-up India plan for women. The scheme, sources said, has been finalised as part of the drive of the NITI Aayog to promote participation of women in workforce. “The start-up scheme for women will be unveiled on 1 April with an initial dedicated fund of Rs 100 crore. The thrust will be to encourage women to become entrepreneurs in the technological space,” said a government source.

Parliament’s Budget Session Begins Today: The Budget session of Parliament will begin today with the government ready to push a number of legislative proposals, including the three enabling goods and services tax (GST) bills to allow the rollout of the taxation reforms from 1 July. The three enabling GST bills – central GST, integrated GST and compensation to states – are on the top of the agenda for the government during the second part of the Budget session of Parliament, which will conclude on 12 April.

Ease Of Doing Business: New Push For Coastal Infrastructure Projects: The Union government has started online clearance procedure for all projects related to construction of infrastructure in the coastal areas of the country, in its continuing push for ease of doing business. The ministry of environment and forests has launched the web portal for obtaining coastal regulation zone clearances by project proponents. The system is based on web architecture, similar to the existing systems in place for according environmental and forest clearances.

Shiv Sena Veteran New Mumbai Mayor: Shiv Sena's Vishwanath Mahadeshwar has been elected Mumbai's new mayor. He will be the 76th mayor of the city and will be taking over charge from Sena's Snehal Ambekar. Mahadeshwar defeated Congress nominee Vithal Lokare. Even though the former alliance partners – the Shiv Sena and the Bharatiya Janata Party fought the civic polls separately, the BJP corporators voted in favour of the Sena nominee Mahadeshwar.

India’s New Formula To Win UNSC Permanent Membership: To win permanent membership of the United Nations Security Council, India has offered to forgo veto power initially as a bargaining chip to get the reform process moving. Speaking on behalf of the G4 nations – Brazil, Germany, India, and Japan – India's Permanent Representative at the UN, Syed Akbaruddin, said, while new permanent members would, in principle, have veto powers that the current five members have, "they shall not exercise the veto until a decision on the matter has been taken during a review."

Now Kerala Traders Want Ban On Coca-Cola And Pepsi: After Tamil Nadu, now a section of traders in Kerala has called for a ban on sale of soft drinks made by Coca-Cola and PepsiCo, starting 14 March. The traders’ body instead wants to promote locally-made beverages. The allegations are based on a severe drought in Kerala, and the traders alleged that both the multinational cola firms have been depleting the state’s water resources.

Kansas Governor Says Sorry For Violence Against Indians: Kansas Governor San Brownback, in a letter to Prime Minister Narendra Modi, expressed “profound regret” at the terrible act of violence against the Indian nationals last month and said that acts of hate and intolerance have no place in his state. Srinivas Kuchibhotla, 32, was killed and Alok Madasani, another Indian of the same age, injured in a shooting by navy veteran Adam Purinton, who yelled “terrorist” and “get out of my country” before opening fire on them in Kansas last month.

Kenneth Arrow And The Age Of Empires: Narendra Modi, Akhilesh Yadav and Mayawati are the three pivotal players of UP elections. Applying Nobel-Prize winning economist Kenneth Arrow’s Impossibility Theorem to Uttar Pradesh polls. Does it throw up an election result?

Is Globalisation In Retreat? International trade has bounced back from challenges, natural or man-made, throughout the course of history. The future is unlikely to be any different, the current tide against globalisation notwithstanding.

PM Modi Needs To Politically Rebrand Indian-Americans In Trump’s America: The Prime Minister is now up against the challenge of politically repositioning and rebranding the Indian-American community as the best immigrant community in the US under Donald Trump.

A Rising Power Without Allies: The growing rift with North Korea means that China is now left with just one real ally, quasi-failed Pakistan. China must grapple with the larger question of whether it can be a peer rival to the US without any allies.

How I Learnt That Liberals In India Are Not Really Liberal: Shefali Vaidya has faced harassment for daring to go against the ‘liberal’ consensus in India. Here she writes on why instead of taking it lying down, she chose to speak up.