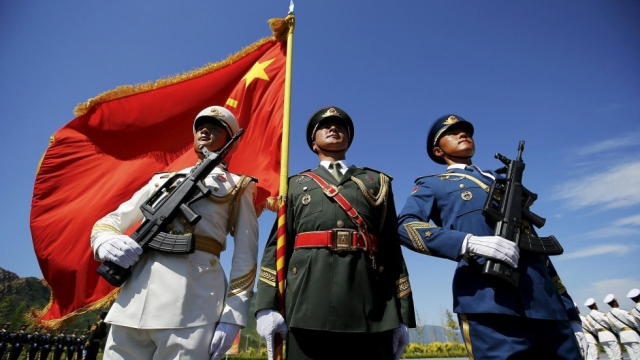 PLA troops from all services train for military parade in Beijing

Chinese Power Companies May Be Barred From Indian Market: India seems to be firming up a reciprocity based policy on allowing foreign direct investment in power projects. This may soon lead to Chinese power companies being gradually barred from investing or bidding for power infra projects. While India has allowed liberal FDI norms, the Chinese have forbidden foreign investment due to ‘grid security’ reasons.

China Systematically Dismantled CIA Spy Network: A New York Times investigative report that was published last Sunday claimed that Chinese counter-intelligence operations led to the arrest and death of more than a dozen CIA informers from 2010 through 2012. These counter-intelligence moves are said to have crippled CIA operations against Beijing. The United States is yet to get to the bottom of this setback despite investigations and alerts.

NIA Will Be Extra-Careful While Proceeding Against Geelani: The National Investigative Agency has only registered a preliminary enquiry against Kashmiri Islamist separatists. The agency’s sources have told The Hindu that they would need irrefutable evidence before landing up at the doors of the Hurriyat and others. They seemed to have wisened up after a botched investigation into Hurriyat leader Syed Ali Shah Geelani last year on money laundering charges. It looks like the agency wants to take its time to ensure a watertight case this time.

Trump Targets Iran In Saudi Speech: US President Donald Trump is clearly taking American foreign policy to pre-Obama days. He used his first major overseas tour speech to hit out at Iran and signalled American support to Sunni Arab states. Meanwhile, he used the speech to carefully move away from his earlier anti-Islamist stances and instead chose to dish out boiler-plate lines such as denying that there was any battle between Islam and other faiths etc. All this must have been music to Saudi Arabia.

Time to ask bankers tough questions
YES Bank revealed in its annual report, released earlier this month, that its estimate of bad loans was far lower than what an audit by the Reserve Bank of India had estimated.

On Gender Parity, The Constitution Matters
With all pretensions dropped, the dividing line between the ‘secularists’ and Islamic fundamentalists has just disappeared. Both are two sides of the same coin.

Next Door Nepal: Connections, Old And New
India is likely to come to terms with Nepal joining the Belt and Road Initiative. China’s stakes and presence in Nepal seem to have been accepted by India as an unstoppable reality.