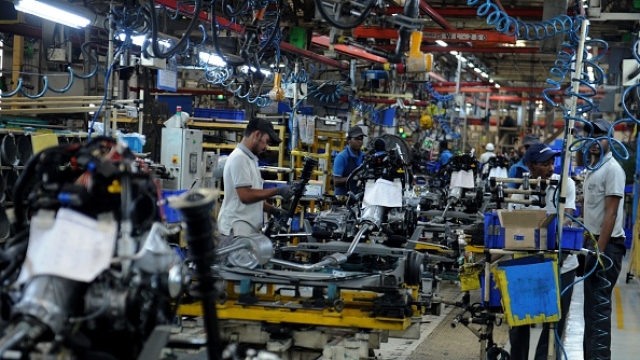 Factory workers at an assembly in Chennai. (GettyImages)

Factory Output Expands: A day after data showed that the adverse impact of demonetisation on India’s economy was much lower than anticipated, another set of data released on Wednesday indicated that companies and consumers are getting over any persisting cash crunch concerns. India’s factory activity expanded for a second straight month in February, while an increase in raw material costs pushed firms to raise prices at the fastest rate in nearly three and a half years.

India Successfully Tests Yet Another Interceptor Missile: In yet another step towards an operational two-tier ballistic missile defence system, India on Wednesday tested a low-altitude interceptor missile to destroy an incoming ballistic missile over the Bay of Bengal. Defence officials said the interceptor missile fired from the Abdul Kalam Island (Wheeler Island) off Odisha coast "successfully destroyed" the incoming "enemy" Prithvi missile, which was launched from the integrated test range at Chandipur.

Banks To Levy Charges After Four Transactions: In a bid to promote cashless transactions, banks have started charging a specific transaction amount after a certain limit in the case of cash transactions. HDFC Bank, ICICI Bank and Axis Bank have already decided to implement the new charges. According to HDFC Bank, people who hold savings accounts don’t have to pay any transaction amount up to four transactions from the home branch but with every additional transaction, the customer has to pay an amount of Rs 150. Other banks are expected to follow suit soon.

LPG Price Hike Steepest In India’s History: Liquified petroleum gas (LPG) cylinders will cost Rs 86 more with effect from 1 March. The price hike is reported to be the steepest cost escalation of cooking gas cylinders in India’s history. However, government clarified that the price rise would not adversely affect the subsidised consumers. In order to keep the net amount spent by subsidised consumers in check, the amount of subsidy has been increased.

Nobody Listens To Our Orders, Laments SC: The Supreme Court (SC) observed on Wednesday that "nobody listens to our orders", while refusing to accord urgent hearing to a plea seeking massive reforms in police force across the country. "Police reforms are going on and on. Nobody listens to our orders," a bench headed by Chief Justice J S Khehar lamented while declining the request for urgent hearing on the plea filed by Ashwini Kumar Upadhayay, lawyer and Delhi BJP spokesperson.

Cleaning Ganga: Government To Rope In Private Firms: The Water Resources Ministry is awarding projects worth Rs 1,050 crore to private companies for setting up sewage treatment infrastructure in Patna in the next two to three years, it was announced on Wednesday. The amount will be spent for setting up two sewage treatment plants (STPs), renovation of one existing STP, construction of two pumping stations and laying of new underground sewage network of over 400 km in the state's capital.

Pakistan Created Terror Groups, Now The ‘Monster’ Devouring Its Creator, Says India: Slamming Pakistan at the 34th session of the Human Rights Council in Geneva, India on Wednesday said the fundamental reason for unrest in Jammu and Kashmir is the cross-border terrorism aided and abetted by Pakistan. “Pakistan has created terrorist outfits against India. This monster is now devouring its own creator,” India said.

Housing Boost For Military Personnel: The Defence Ministry is pushing for housing project of military personnel with spending over Rs 24, 000 crore. Under married accommodation project, 80,000 units would be constructed at 150 military stations across the country and with economy of scale these technologies would be major cost saving exercise along with quality housing for defence personnel, Married Accommodation Project and Military Engineering Service Director General Sanjeev Jain said.

Trump’s New Move May Benefit Indians: US President Donald Trump's proposal for a merit-based immigration system has the potential to benefit Indians, a large number of whom have high levels of education and skills. According to a report by the Pew Research Center, 70 per cent of Indians in the US are college graduates. The US Census Bureau reported that in 2013, the median household income for Indian families was over $100,000.

The Shrinking Plan Technology Has Made The Idea Of Decentralised Planning Tangible: Decentralised planning lacks the raw appeal that centralised mathematical models possess.

Demonetisation In Retrospect – Reflections Of A Travelling Salesman: Buoyed by GST on the horizon, it’s time to look ahead with a thrust on infrastructure spend in the last lap of Modi government.

Make The Men Answer: It is also high time that the women of this country held their employers and government accountable, through their vigilance – and their votes.

Donald Trump Improves Tone But Falls Short On Substance: Whether it was taxes, health care, immigration, or infrastructure, the Donald Trump speech wasn’t just light on details it was almost entirely lacking in them.

Q3 Shock For DeMo Cassandras; How They Got It Wrong, And Why Q4 May Not Prove Them Right Either: India is recovering rather quickly from the DeMo blow. The only ones not on the path to recovery are the Cassandras.