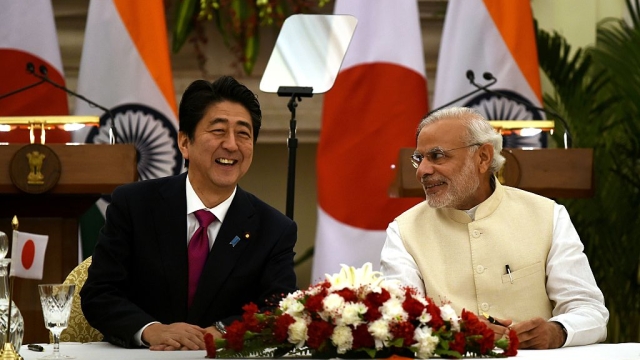 Civil Nuclear Deal On Cards As Modi Visits Japan: Prime Minister Narendra Modi will start a three-day visit to Japan today (10 November) which is expected to see the signing of a civil nuclear deal between the two countries. Modi will be holding the annual summit meeting with Japanese Prime Minister Shinzo Abe and have an audience with the Emperor of Japan.

Replacement Of Currency Notes From Today: The government assured banks and post offices would start giving out replacement notes for the now invalid Rs 500 and Rs 1,000 bills, beginning today (10 November). Finance Minister Arun Jaitley said the government has asked banks to remain open through Saturday and Sunday to deal with the anticipated rush.

Cash Deposits Won’t Have Tax Immunity: Deposits of now-defunct old Rs 500 and Rs 1,000 currency notes in bank accounts will not enjoy immunity from tax and law will apply on source of such money, Finance Minister Arun Jaitley on Wednesday said. He said that people who have accumulated black money, crime money or bribe would suffer after this.

Government To Monitor Cash Deposits: The government on Wednesday warned that it would monitor all cash deposits of over Rs 10 lakh made till the end of the year and impose a penalty of up to 200 per cent in case the funds did not tally with an individual's tax returns.

Toll Tax Suspended Until Tomorrow: The government has announced the suspension of toll tax across all National Highways until midnight of 11 November. The decision was taken by Road Transport and Highways Ministry keeping in mind the historic decision of scrapping Rs 500 and Rs 1,000 currency notes.

Obama Vows Smooth Transition Of Power: US President Barack Obama called on Americans to support president-elect Donald Trump on Wednesday, and assured to work towards a successful transition of presidential power. “We are now all rooting for his success in uniting and leading the country,” he said.

Hillary Clinton Accepts Defeat: Democratic presidential candidate Hillary Clinton has pledged to work with president-elect Donald Trump to unite a divided nation in a concession speech, graciously accepting her defeat. “We owe Trump an open mind and the chance to lead,” she said.

Indian Americans Make It Big In United States Congress: Indian Americans made a successful entry in domestic American politics today, with one becoming the first to be elected to the Senate and four others winning seats in the House of Representatives.

Bihar Milk Sale Surges After Prohibition: Sale of milk has increased by 11 per cent in the last seven months since ban on alcohol came into effect in Bihar, Chief Minister Nitish Kumar claimed. He was addressing a “Chetna Sabha” on the launch of “Nishchay Yatra” in West Champaran district.

Another Soldier Martyred In Pakistani Firing: A soldier was martyred in Pakistani firing on Wednesday in the Machhal sector of Jammu and Kashmir. In another encounter at Darsu in North Kashmir, security forces killed two terrorists and recovered two weapons.

Mop-Up, Protect Special Ops: Underlying all this is the war against undeclared taxable income. The timing of the announcement was patently designed to ensure evaders will not be able to convert their ill-gotten cash into assets.

Donald Trump’s Victory Is Reminder Of Gap Between Analysis And Grass Roots Politicians: President Trump should be encouraged to begin his term working with India and other likeminded democracies. Many around the world may despair the Trump victory, but India has few reasons to.

The Rise And Rise Of Rural Consumers: Rural population represents a massive market opportunity for the progressive consumer companies. These economies have increasing spending power.

Designing For The Non-Conscious: The world has a lot to gain by tapping into the biological reality of the non-conscious.

Donald Trump Defeats Clinton, Obama, Media, Pundits And History To Win White House: Donald Trump is the next President of the world’s oldest democracy. The US has elected the first man who has never held public office, as its Commander-in-Chief. It has declined to elect its first woman President.

Demonetisation: Short-Term Inconvenience Will Be More For Farmers, Small Businessmen, Says Jayant Sinha: Jayant Sinha said that while farmers and small traders will be inconvenienced by the demonetisation scheme, the urban middle class will be unaffected.

The Congress Story In UP: Difficult To Spot A Point Of Inspiration: In Uttar Pradesh, the past, present and future—all look bleak for the Congress.