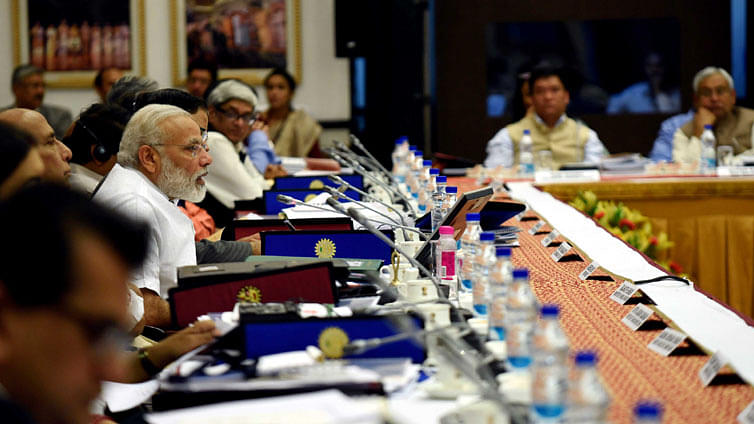 Modi’s New Reforms Pitch: Addressing the third meeting of NITI Aayog’s governing council, Prime Minister Narendra Modi on Sunday called for conducting simultaneous elections to the Lok Sabha and the state assemblies and shifting to a January-December fiscal year. He called for carrying forward the debate and discussions on holding simultaneous elections to Parliament and state legislatures. He added that there have been suggestions to follow January to December as financial year. The Prime Minister asked the states to take the initiative in this regard. Currently, India follows April-March as fiscal year.

NITI Aayog’s Growth Plan: India is headed for an annual average growth rate of 8 per cent in the next 15-16 years, NITI Aayog vice-chairman Arvind Panagariya said on Sunday. Presenting the draft 15-year vision document at a meeting chaired by Prime Minister Narendra Modi, Panagariya said the Centre and states discussed various reforms that are required in the coming years including the implementation of goods and services tax from July. After 15-16 years, India’s gross domestic product or the size of the economy will touch Rs 469 lakh crore from Rs 137 lakh crore in 2015-16, Panagariya said.

Exit Polls: BJP Landslide In Delhi Municipal Elections: The Bharatiya Janata Party (BJP) could be headed for a landslide victory in the Delhi municipal polls with two exit polls predicting the party finishing way ahead of the Aam Aadmi Party (AAP) and the Congress with over 200 of the 270 wards where polling was held on Sunday. According to the India Today-Axis exit poll, the BJP may bag anything between 202 and 220 seats, while the AAP and the Congress will score something around 23-35 and 19-31 respectively. The CVoter-ABP exit poll claimed the BJP was likely to sweep Delhi with 218 seats, limiting the AAP and the Congress to 24 and 22 seats respectively. The counting of votes will take place on 26 April.

Tamil Nadu Farmers Suspend Protest: Tamil Nadu farmers, who have been protesting at Jantar Mantar for the past 40 days, have announced suspension of their protest till 25 May. The announcement on Sunday came just ahead of an opposition-called bandh in Tamil Nadu, and after Chief Minister Edappadi K Palaniswami met them with an assurance that their demands will be met. Palaniswami met the farmers and promised to take up the issue with the Prime Minister. He also maintained that his government had discussed the issue with Finance Minister Arun Jaitley and Home Minister Rajnath Singh.

WhatsApp Groups That Spark Kashmir Violence Shut Down: More than 90 per cent of the nearly 300 WhatsApp groups that were being used to mobilise stone-pelters in Kashmir to disrupt security forces' operations at encounter sites have been shut down. Each of these 300 WhatsApp groups had around 250 members, a senior police official said while explaining how stone-pelting mobs were mobilised to disrupt the security operations. He said the government's policy of suspending internet services appeared to be showing positive results.

UK Arrests 38 Indians For Visa Breach: Immigration officials in the UK have detained 38 Indians, including nine women, for overstaying their visas or working illegally after conducting raids in two clothing factories in the city of Leicester. The UK Home Office Immigration Enforcement team raided MK Clothing and Fashion Times UK in the city in the East Midlands region of England and arrested 38 Indians and one Afghan man. Of those detained, 31 had outstayed their visas, seven had entered the country illegally and one was working in breach of their visa conditions, reports said.

India-Israel To Sign Mega Defence Deal During Modi’s Visit: A number of mega defence deals including procurement of an air defence system for the Indian Navy are likely to be sealed during Prime Minister Narendra Modi’s upcoming visit to Israel which will be first by an Indian head of state to the Jewish nation. Modi’s visit coincides with the establishment of 25 years of diplomatic relations between the two countries. The much-awaited deal for Barak-8 air defence missile systems for the navy and procurement of Spike anti-tank missiles for the Indian Army are expected to be firmed up during Modi’s visit to Tel Aviv.

FBI May Help India In Fighting Terror: The Federal Bureau of Investigation (FBI) may share "encrypted data" on the internet and social media platforms with India. This comes after India’s repeated requests for evidence from the "digital space" as a large number of social media platforms – WhatsApp, Facebook, Google and YouTube – had their servers in the US. The US recently shared thousands of internet-based conversations between Jaish-e-Muhammed members involved in the Pathankot airbase attack, which helped India build a strong case against Maulana Masood Azhar.

Old Templates Of Oppositional Unity Against The BJP Will No Longer Work: Unity among non-BJP parties stands a chance if it is on the basis of shared political commons: short- and mid-term electoral and legislative objectives coupled with long-term ideological purpose.

Positive Real Rates, Rupee And Reserves Adequacy: The monetary policy path that India and RBI have chosen is to focus more on strengthening financial stability, while continuing with various structural reforms. Inflation expectations saw a sharp decline only when the Reserve Bank of India (RBI) managed to turn real rates positive in India.

Every Thing You Want To Know About Indian Bond Market But Were Afraid To Ask: While the bond dealers in the state-owned banks need to appreciate the finer aspects of risk management, the aggressive short sellers must be forced to pay a higher price for taking risks.

The Sanctity Of Democratic Bodies Must Be Upheld: To make its functioning more transparent, the Election Commission had demanded the facility of a voter-verifiable paper audit trail with every EVM. Unaffected by allegations of being unethical and biased, government bodies such as the Election Commission of India and judiciary have no option but to stick to the policy of impartiality.

Plight Of The Digital Proletariat In An Uber, Ola World: The larger problem is that existing labour laws do not even recognise the new worker-employee relationship, leave alone ascribing responsibilities. Clearly, there is a challenge in the making.

World Book Day: An Ode To The Bard, The Best Of Them All: Shakespeare is the first literary writer to invent truly three dimensional fictional human beings: characters who, in hearing themselves think, proceed to develop. They interact in a vibrant, global context, showing the extremities of the human condition.