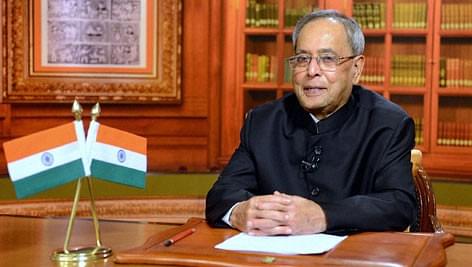 President Pranab Mukherjee addressing the nation on the eve of Republic Day.

Demonetisation Will Boost Transparency, Says President Mukherjee: President Pranab Mukherjee said the economy may have been slowed down by demonetisation , but its transparency will improve as more and more transactions become cashless. Speaking on the eve of Republic Day, he pointed out that a fifth of Indians still live below poverty line, and that the economy is yet to grow at over 10 per cent for a sustained period of time.

Trump Moves Ahead With Mexico Border Wall: Moving quickly to curb immigration and boost national security, President Donald Trump on Wednesday signed directives to build a wall along the US border with Mexico and crack down on US cities that shield illegal immigrants. He is also expected to take steps in the coming days to limit legal immigration, including executive orders restricting refugees and blocking the issuing of visas to people from several Muslim-majority Middle Eastern and North African countries.

More Educational Institutions May Get Autonomy: Human Resources and Development Minister Prakash Javadekar said more universities and other educational institutions could be freed from the government’s “micro-management” along the lines of the IIM bill, which has provided them complete autonomy to function. He said a system was being considered where the best performing institutes would be given maximum autonomy while those not performing well would be highly regulated by the ministry.

Budget To Focus On Transforming India, Says Finance Ministry: The Finance Ministry said the forthcoming budget will focus on development for all based on “new thinking, new direction” and added the drive to transform India will continue in budget 2017-18 to be unveiled by Finance Minister Arun Jaitley. The third full budget of the government will be presented in the Lok Sabha on 1 February, as against the usual date of the last working day of that month.

Another Chance To Deposit Banned Notes: India’s central bank may give citizens another chance to deposit the banned Rs 500 and Rs 1,000 banknotes, but the exchange would be for a limited sum, sources in the government and banking sector said on Wednesday. “The issue is being looked into and the advice would be to hold on to those notes as we are examining (opening) another window for these genuine people,” they said.

New SEBI Clamp On Vijay Mallya: The Securities and Exchange Board of India (SEBI) on Wednesday barred businessman Vijay Mallya and six others from the securities market in a case related to alleged fund diversions from United Spirits. Besides, Mallya and former United Spirits’ official Ashok Capoor have been restrained from “holding position as directors or key managerial persons of any listed company”.

Surgical Strike Soldiers Win Gallantry Awards: On the eve of the Republic Day, 19 personnel of two Special Forces battalions, which carried out surgical strikes along the Line of Control last September, were decorated with gallantry awards, including a Kirti Chakra and five Shaurya Chakra. Besides these awards, 12 men from these units have been given Mention in Despatches, which is meant to recognise distinguished and meritorious service in operational areas and acts of gallantry.

Relax Withdrawal Limit For Candidates, Election Commission To RBI: The Election Commission has written to the Reserve Bank of India (RBI) asking it to increase the weekly limit of cash withdrawal limit for candidates from Rs 24,000 to Rs 2 lakh. The request comes ahead of the assembly elections in five states, which begin on 8 February. Currently, no special provision has been made for the candidates contesting the assembly elections.

India Improves On Corruption Index Ranking: In a list topped by New Zealand and Denmark, India has marginally improved its ranking in the graft watchdog Transparency International's corruption perception index for 2016. India's score has improved by two points, as in 2015 the country had scored 38. The Berlin-based anti-graft organisation has used World Bank data, the World Economic Forum and other institutions to rank 176 countries by perceived levels of corruption in public sector.

Social Sector Should Get Its Due Share In Budget 2017: Adequate investments in MGNREGA and agriculture will be something that budget 2017 must put in place. Budget 2017 should be about making some actual commitment reflected in higher allocations towards the social sector.

The Case Against Universal Basic Income: Suggestions in favour of universal basic income are made fiscally feasible with a number of assumptions. But, at this stage of development, there is no reason why the government should transfer cash to the entire population.

Moving Towards A Secure Digital Economy: The velocity of digitisation and technology adoption must necessitate a response different from what was the norm in the ‘public sector era’. A wider adoption of digital payments will invariably change the dimensions of risks, crime and security.

No Proof Required: Taxation – Beware Of The Enemy Within: A necessary political and economic strategy for India’s success is for Modi/Jaitley to do the opposite of what the Nehru-Gandhi Congress has done for the last 70 years – make a significant cut in the corporate tax rate.

Theresa May’s Brexit Challenge: Even as Prime Minister Theresa May will use her parliamentary skills to secure quick approval to start Brexit, she is likely to have a bigger battle at hand, to preserve another union – the UK.