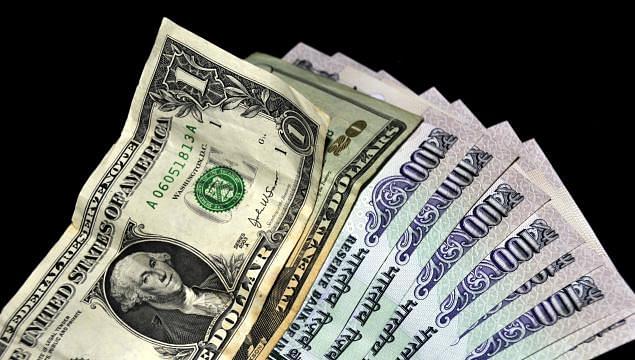 Indian rupees and US dollars.

Rupee At 16-Month High After Big Mandate For BJP: Bharatiya Janata Party's strong showing in the recent state elections spurred the Indian rupee's biggest rally since early 2015. The rupee continued its stellar run against the dollar to finish at a fresh 16-month high of 65.69 on Wednesday as exporters aggressively offloaded the US currency ahead of the Fed meet outcome. The domestic currency has risen 2.23 per cent since the beginning of the year.

Cabinet Reshuffle On Cards: The Union Cabinet is expected to see a reshuffle soon after the Parliament session on 12 April, sources said on Wednesday. Since finance and defence are considered ministries with "heavy workload", it is likely that Arun Jaitley may make way for a new defence minister. Speculation was also rife about a possible change in the External Affairs Ministry after Sushma Swaraj underwent a kidney transplant in December.

Crucial GST Council Meeting Today: The goods and services tax (GST) council is expected to approve two crucial legislation at its meeting today (Thursday), giving a fresh push to the government's efforts to roll out the ambitious indirect tax reform from 1 July. The council is likely to approve the state GST and the union territory GST bills, and the government is expected to seek cabinet approval for the other bills approved by the council earlier.

Terror Factory Pakistan Under Fire At UN: India rapped Pakistan during a United Nations Rights Council session in Geneva, saying its terror policies have alienated its own people through continued mistreatment of minorities. Branding it a terrorism factory, the Indian representative at the council told Pakistan to stop inciting and supporting violence and terrorism in any part of India. Meanwhile, it is reported that Pakistan is planning to declare the strategic Gilgit-Baltistan region as its fifth province, a move that may raise concerns in India.

EVMs Row: Hazare Slams Kejriwal: Anna Hazare has hit out at former associate and Delhi Chief Minister Arvind Kejriwal's demand for holding civic polls through paper ballots. The social crusader said that those doubting the electronic voting machines (EVM) were trying to go back in time. "The EVMs should not be discontinued. Those who are doubting the machines are trying to go back in time. The world is moving ahead and EVM is the way to go", he said. Hazare said that holding elections through paper ballot was a painfully time consuming process.

Nationalism Un-Islamic, Says Hizbul Chief: Kashmir unit chief of Hizbul Mujahideen, Zakir Rashid alias Moosa, has termed nationalism and democracy as “un-Islamic”, and asked militants and stone-pelters to fight for supremacy of Islam. “Our intent should not be that we are fighting for Kashmir's freedom. Instead, it should be that we are fighting for supremacy of Islam. We want to introduce Sharia here,” he said in a video.

NC-Congress Join Hands For J&K Bypolls: In a bid to put up a combined fight against the ruling Peoples Democratic Party-Bharatiya Janata Party coalition, the National Conference (NC) and Congress on Wednesday decided to jointly contest the forthcoming Lok Sabha bypolls in Jammu and Kashmir. The main opposition parties of the state said NC president Farooq Abdullah will contest from Srinagar constituency, while Jammu and Kashmir Pradesh Congress Committee chief Ghulam Ahmad Mir will face the bypoll from Anantnag.

Aviation Sector Now Part Of Multi-Modal Logistics Hubs: The aviation sector will now be a part of multi-modal logistics hubs in India. Road Transport, Highways and Shipping Minister Nitin Gadkari said integrated approach for logistics is the priority of the government. “Airports will be part of multi-modal logistics hubs. Our government is setting up 400 regional airports and they will have pre-cooling cold storages among other logistics solutions,” he said.

India-Russia In FTA Talks: India and Russia are expected to chalk out a road map for signing of a free trade agreement (FTA). Commerce and Industry Minister Nirmala Sitharaman and her Russian counterpart Denis Manturov are slated to address the India-Russia Business Forum in Chennai today. The two sides may also take up the issue of mutual market access for agricultural and processed food products, including dairy products and bovine meat, to widen the range of products for bilateral trade.

Trump’s New Travel Ban Blocked: A Federal judge in Hawaii has blocked President Donald Trump's new travel ban, hours before it was due to begin at midnight on Thursday. The ruling by US District Judge Derrick Watson stops the executive order from going into effect. Hawaii is one of several US states trying to stop the ban. The directive would have placed a 90-day ban on people from six mainly Muslim nations and a 120-day ban on refugees.

Trump Administration Supports India’s NSG bid: The Donald Trump administration said the US is working with India and Nuclear Suppliers Group (NSG) members to push for New Delhi’s membership in the elite grouping, indicating that there is no change in America’s policy. “The United States supports India’s full membership in the four multilateral export control regimes, and we believe that India is ready for NSG membership,” a State Department spokesperson said.

Fed Raises Key Interest Rates: The US Federal Reserve has raised its benchmark interest rate for the second time in three months and signalled further hikes this year will be gradual. The Fed's key short-term rate is rising by a quarter-point to a still-low range of 0.75 per cent to 1 per cent. The central bank said in a statement that a strengthening job market and rising prices had moved it closer to its targets for employment and inflation.

The Voter’s New Religion: The results of these “semi-final” polls show that people want to go with Modi for faster development and corruption-free governance. It is evident that there is a new hunger among the people for development.

Democratising Innovation And Entrepreneurship: There is a widely accepted consensus among policy and practitioner circles that private venture investment in these sectors has not matched either their business potential or their societal importance, leading to inadequate deployment.

Don’t Fret For Oil, Asia’s Getting Its Appetite Back: While Indian imports of crude and petroleum products rose about 12 per cent in 2016, Japan’s fell 1.65 per cent. Emerging Asia, 40 per cent of forecast economic growth through 2020, is showing signs of recovering its appetite for crude.

Bumps In The Road For India-US Trade: The H1B visa debate shows that India is vulnerable to a US clampdown on services exports. India is likely to find a Donald Trump-led US a less yielding partner in the quest to reach $500 billion in bilateral trade.

Kamal Haasan’s Recent Interview And What It Says About Tamil Nadu: Tamil actors are fueling the rise of a neo-Luddite movement in Tamil Nadu and Kamal Hassan is cheer leading the whole show.