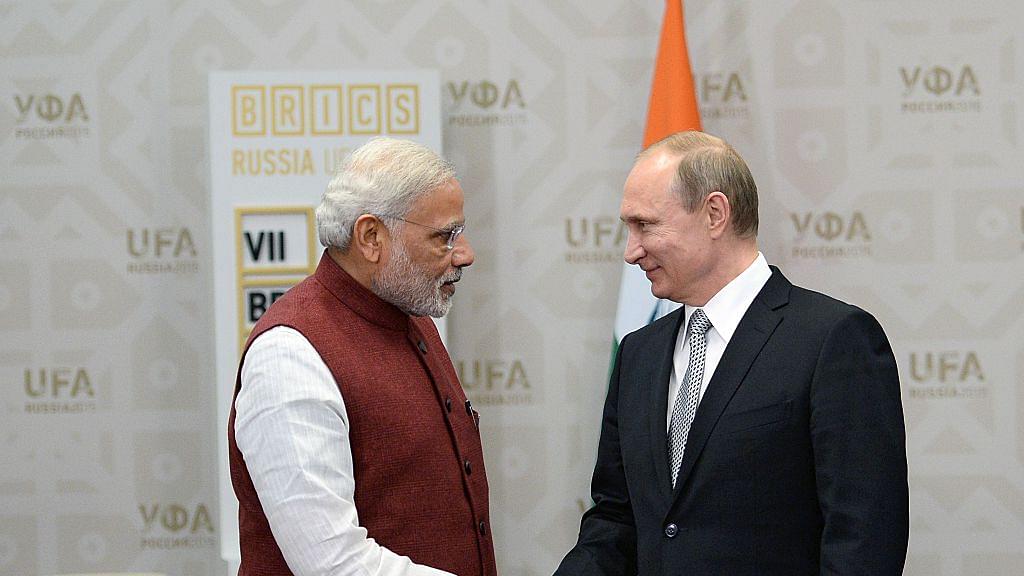 Modi and Putin at BRICS Summit in Russia. (GettyImages)

State Set For Modi-Putin Summit: Russia and India on Wednesday agreed to move ahead joint projects in a range of sectors, including nuclear energy, as the two sides prepared for a summit between Prime Minister Narendra Modi and President Vladimir Putin on 1 June. External Affairs Minister Sushma Swaraj and Russian Deputy Prime Minister Dmitry Rogozin took stock of implementation of various key bilateral initiatives in the economic field at a meeting of the India-Russia Inter-Governmental Commission on Trade, Economic and Cultural Cooperation, a key forum to address major issues concerning bilateral ties.

Triple Talaq Hearing Begins Today: A five-judge constitution bench of the Supreme Court will begin hearing arguments from today (Thursday) to decide the constitutional validity of the practice of triple talaq. Nikah halala and polygamy, practised among Muslims in the country, would also be examined during the hearing. Chief Justice J S Khehar will preside over the bench, which would also comprise Justices Kurian Joseph, R F Nariman, U U Lalit and S Abdul Nazeer. The bench will also take up the main matter on its own as a petition titled "Muslim Women's quest for equality".

Poll Panel’s All-Party Meeting On EVMs: The Election Commission of India (ECI), which is facing a volley of questions and allegations over electronic voting machines (EVMs), will meet representatives of 48 recognised political parties to clear the air on the issue on Friday. During the suggested "hackathon" politics parties will be given a free hand to try and tamper with EVMs kept in ECI strong rooms. The commission would also invite suggestion on VVPAT (voter verified paper audit trail) recount rules. Considering the doubts being raised about EVMs, EC has asked political parties to suggest new rules.

ICJ Sets Date For Kulbhushan Jadhav Case Hearing: The International Court of Justice (ICJ), which has stayed the death sentence of Indian national Kulbhushan Jadhav by Pakistan, will hold public hearings in the case on Monday. “The hearings will be devoted to the request for the indication of provisional measures submitted by India,” the ICJ said. The ICJ’s intervention is being seen by some as a reprieve for Jadhav. But, Sartaj Aziz, foreign affairs adviser to Pakistani Prime Minister Nawaz Sharif said the Pakistani government will review the ICJ’s jurisdiction in the case.

Chennai Metro Rail Roll Out On Sunday: The underground line of Chennai Metro Rail will open for the public on Sunday, making the city the fourth in the country to launch such a facility after Kolkata, Delhi and Bengaluru. "Yes, we are ready. We have conducted inspections, trial runs and completed the finishing touches to all the stations," a metro rail official said. The line will cover a distance of eight kilometres from Nehru Park to Koyambedu, through tunnels and seven underground stations, to connect the already operational line at Koyambedu.

Call To Declare Cow As National Animal: An influential Muslim cleric has urged the Bharatiya Janata Party-led National Democratic Alliance government to consider declaring cow as the "national animal". Jamiat Ulama-I-Hind President Maulana Syed Arshad Madani expressed concern over the "atmosphere of fear" in the wake of attacks by vigilante groups. Madani also spoke on the much debated issue of triple talaq. "If the Supreme Court comes out with an acceptable solution, we will welcome it," Madani said.

Indian Shares Scale New Peak: Indian shares hit a record high on Wednesday as shares of consumer goods and agriculture-dependent companies rallied after the country's weather office forecast a higher monsoon rainfall than previously expected. The broader National Stock Exchange Nifty rose as much as 0.81 per cent to a record high of 9,392.50, surpassing its previous milestone recorded on 5 May. The benchmark Bombay Stock Exchange Sensex gained as much as 0.91 per cent to 30,207.13, its highest ever. Analysts said the long-term outlook for stocks remained healthy as earnings so far have been encouraging.

Kochi Metro Trial Runs Begin: The final service trial run of the Kochi Metro began on Wednesday paving way for commercial operations to begin. Prime Minister Narendra Modi is expected to officially inaugurate the services in June. The metro train project in Kochi is the first in Kerala and will span 13 kilometres in the first phase from Aluva to Palarivattom. Fourteen more stations will come up in the second phase in which the train will further travel to Thripunithura. Extensions to the international airport in Nedumbassery, and to Kakkanad, home to several IT firms, are also planned in subsequent phases.

New Medical Visa Rules For Pakistanis: India’s Foreign Ministry announced on Wednesday that the country will only consider medical visas for Pakistani patients if the application is backed by a recommendation from Pakistan Prime Minister's Foreign Affairs Adviser Sartaj Aziz. New Delhi has not stopped giving medical visas to Pakistani nationals, Foreign Ministry spokesperson Gopal Baglay said. Baglay said the change in rule had been made to be able to ascertain that the requests received from Pakistan are genuine.

The Fragility Of Supply Chains Under Proposed GST: GST will make supply chains more efficient, but the drawback in the current is that it makes supply chains vulnerable to upstream compliance-related disruption. If the tax liability related to the invoice is outstanding, the government should penalise the defaulting firm and downgrade its rating.

Private Schools Need To Be Regulated: For good, equitable education there is no substitute for a robust public system. But till we get there, such a regulatory mechanism will reduce rampant exploitation of the public and help improve educational quality.

Can Emmanuel Macron Pull It Off? Macron’s unabashedly Europeanist policies are not just a matter of politics or principle. They are also critical to the success of his economic programme. The success of Macron’s presidency thus depends to a large extent on European cooperation.

Indian Healthcare Must Be Evidence-Based: Healthcare policy has relied on pharmaceutical and equipment advances, but evidence-based policymaking has been absent when it comes to service delivery. Spending resources on research will help the government deliver results effectively.

How Mallya, Subrata Roy And Justice Karnan Courted Their Own Downfall: The invisible link connecting these three is that they are the causes of their own downfall. They believed they were too big to be hauled up before the courts. Even when the courts started taking cognisance of their wrongdoings, they pretended that they could not be touched.