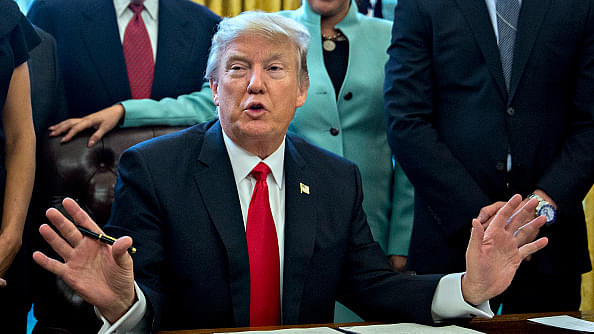 US Pulls Out Of Climate Pact: President Donald Trump announced on Thursday that the United States is pulling out of the Paris climate accord, a United Nations agreement signed by 195 countries at the COP21 climate conference in Paris in December 2015. Trump said he will consider rejoining the deal if it is renegotiated to be more beneficial to the US economy. He suggested that the Paris deal was "unfair" to US workers and taxpayers, and that other nations – notably China and India – stood to benefit more under its current terms.

India-Russia Sign Nuclear Deal: India and Russia on Thursday signed a much-awaited pact for setting up the last two units of the Kundankulam nuclear power plant. The General Framework Agreement and Credit protocol for Units 5 and 6 of the Kudankulam nuclear plant are seen as a major outcome of the annual summit talks between Prime Minister Narendra Modi and Russian President Vladimir Putin. "We will strive to build an 'energy bridge' between our states and expand bilateral relations in all areas of energy cooperation, including nuclear, hydrocarbon, hydel and renewable energy sources and in improving energy efficiency," said the vision document.

Indian Army Releases List Of Most-Wanted Terrorists In J&K: The Indian Army has released a list of the 12 most-wanted terrorists active in Jammu and Kashmir. The list includes top Lashkar-e-Taiba and Hizbul Mujahideen commanders. The list has been released at a time when the state is witnessing protests following the death of Hizbul militant Sabzar Ahmad Bhat in the Tral area of Pulwama district. Bhat, who took over from former Hizbul commander Burhan Wani, was killed by the Army and CRPF.

Two-Way EVM Challenge: The Election Commission of India has pulled out from its strong rooms in Uttar Pradesh, Punjab and Uttarakhand 14 electronic voting machines (EVMs) used in the recent assembly polls there for Saturday’s EVM challenge, in which the Nationalist Congress Party and the Communist Party of India (Marxist) will participate. Meanwhile, the Aam Aadmi Party will hold a parallel ‘EVM challenge’ on 3 June in Delhi to prove that the EVM hackathon being organised by the commission is just an ‘eyewash’.

New Push To Protect Aadhaar Data: India has stepped up efforts to secure Aadhaar data with all government ministries being asked to encrypt unique ID data and personal financial details. The union government has also introduced new safeguards following a number of cases of Aadhaar data leaks on government websites. Officials are being “sensitised” about legal consequences of data breach. The move to protect personal data comes after reports that data of 130 million Aadhaar cardholders has been leaked from four government websites.

Government To Revamp Financing Model For Skills Training: The government is expected to calibrate its financing model for skills development in favour of private players similar to a global practice. They will now be encouraged to take up in-house training with the expenses supported by a central fund. Currently, skills training in India is largely government-driven with only 36 per cent of companies conducting in-house enterprise-based training. The move is aimed at improving the quality of training and to generate a larger number of trained youth, which has not been possible under the government alone financing.

India To Get SCO Membership, Say Russia-China: India will become a full member of the Shanghai Cooperation Organisation (SCO) when Prime Minister Narendra Modi attends the summit-level meeting in Kazakhstan capital Astana on 8 and 9 June, said China and Russia on Thursday. While the Chinese foreign ministry said in Beijing that admission of India and Pakistan as full members to the SCO will be formalised at the political and security grouping’s summit in Kazakhstan next week, Russian President Vladimir Putin said in St Petersburg that India will formally become a member of the SCO within a week.

Jadhav Won’t Be Executed Until Mercy Pleas Exhausted: Pakistan: Two weeks after the International Court of Justice (ICJ) stayed Kulbhushan Jadhav's death sentence, Pakistan said on Thursday that the Indian national would not be executed until he has exhausted his mercy appeals, initially with the chief of the army staff and later with the Pakistan president. Jadhav, 46, was in April sentenced to death by a Pakistani military court on charges of "involvement in espionage and sabotage activities" against the country. The ICJ on 18 May stayed the execution of Jadhav.

Solutions For Legacy Failures In India: India needs to convert the failures of the past into a successful strategy for generating productive employment in the future. The challenge is to structure services so that they can be reliably provided manually on a spatially dispersed basis, and so create stable jobs for all.

GST: Filing Returns Will No Longer Be Taxing: There is an excitement in the country about GST. People want to understand the process of GST. Here are some of the points about the process of filing returns.

Three Years Of Modi Government: The Macro Picture Has Improved Significantly: During the NDA’s three years in government, a number of landmark reforms have been implemented. The macro picture has also improved significantly. Here are 10 key macro developments.

MPC: Speak Up, Stand Up and Stand Out: Communication by the MPC and the RBI needs to improve. Effective communication is a must for policy clarity, consistency and predictability. Indeed, curbing the opportunity and time for asking questions, and engineering diminished disclosure, don’t make for improved communication.

Not Just DeMo: PM Modi’s Black Money Chase Is “X” Factor In Growth Slowdown: The price for having a cleaner economy, with more taxpayers, less evasion and less corruption, is being paid in terms of postponed investments and growth.