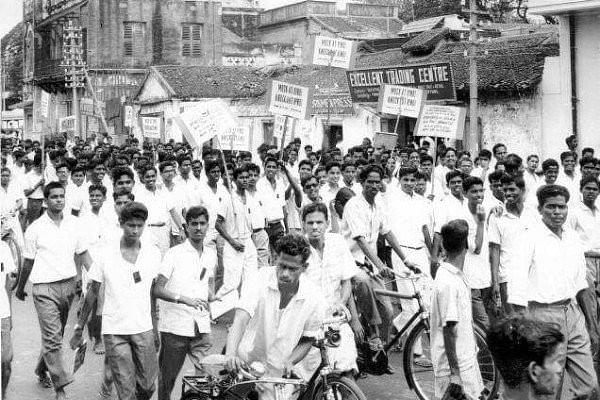 People taking part in an anti-Hindi agitation in Madras.

Tamil Nadu may have been the only state that witnessed an anti-Hindi agitation in the country. The state’s politics in the 1960s was all about opposition, and what Dravidian leaders called “imposition of Hindi”, as a result of which regional parties like the DMK and AIADMK ruled the roost so far. But now, it seems all that will soon be passe.

Data from the latest census shows that that there has been a 50 per cent rise among Hindi-speaking Tamilians between 2001 and 2011. Times of India, reporting the development, quoted population expert P Arokiasamy as saying that with parents’ preference for Central Board of Secondary Education (CBSE) and Indian Certification of Secondary Examination (ICSE) schools, more students are taking up Hindi as their second or third language.

The development should come as no surprise since students in Tamil Nadu have been enrolling themselves with the Dakshin Bharat Hindi Prachar Sabha to learn the language. At least 1.2 million people in Tamil Nadu learnt Hindi through the prachar sabha in the last 10 years, according to this report. Many private and convent schools also give students a choice to learn Hindi or Tamil as a language, while at the higher secondary level, French is also offered as another option.

Learning Hindi gives students and youth in Tamil Nadu a chance to seek jobs outside the State. Many youth, especially in the Information Technology sector, are finding jobs in Bengaluru, where it is easy to carry on daily life knowing Hindi.

People have tended to show interest in learning Hindi following the popularity of serials like Mahabharata and Ramayana on Doordarshan, while Tamil artistes like Mani Ratnam, Shankar and AR Rehman have chosen to parade their talents in Bollywood, More importantly, when Dravida Munnetra Kazhagam (DMK) patriarch, the late M Karunanidhi, nominated Dayanidhi Maran, as the party candidate from the Central Madras Lok Sabha constituency, he ironically said that one of Maran’s advantages was that he could speak Hindi in Parliament.

Despite batting for Tamil language in the open, many Dravidian leaders have chosen to send their children to schools like Don Bosco and Presentation Convent, which have now ensured that their families are at ease speaking Anglicised Tamil.