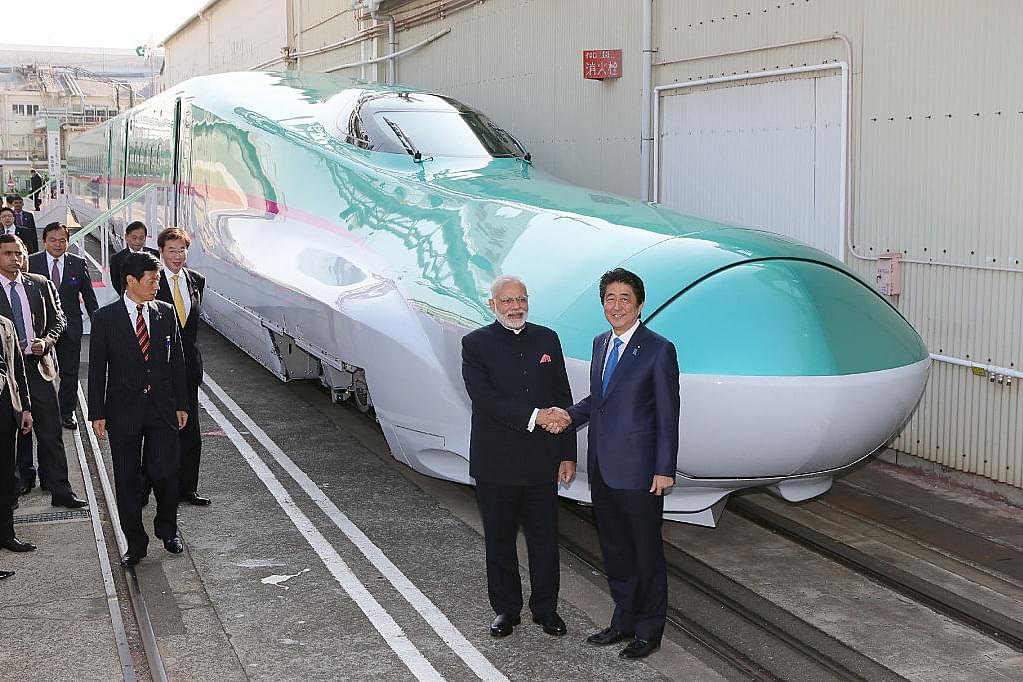 Prime Minister Narendra Modi and his Japanese counterpart Shinzo Abe shake hands in front of a shinkansen train during their inspection at a bullet train manufacturing plant in Kobe, Hyogo prefecture on 12 November 2016. (JIJI PRESS/AFP/Getty Images)

The Mumbai-Ahmedabad Bullet train project conceptualised between Mumbai and Ahmedabad is slated to pick up pace given the recent victory of BJP in Lok Sabha elections and also the upcoming elections in Maharashtra.

With Gujarat completing 60 per cent of land acquisition for the project the onus is now on Maharashtra to do the needed given that the code of conduct would be imposed in Maharashtra in three to four months in light of the assembly polls, reports Deccan Herald.

The bullet train will pass through the states of Gujarat, Maharashtra and Union Territory of Dadra & Nagar Haveli. The train will go through twin districts of Palghar and Thane before entering Mumbai.

The project will cost around Rs 1,10,000 crore of which Japan will finance Rs 88,000 crore at an interest of 0.1 per cent. Of the total project cost, Japan will bear 81 per cent of the cost while the remaining will be borne by the governments of Gujarat and Maharashtra.

There are a total of 12 proposed stations along the 508 km long service which starts from Bandra-Kurla complex in Mumbai and terminates in Ahmedabad with an estimated travel time at two hours. The train will move through Mumbai, Thane, Virar, Boisar, Vapi, Billimora, Surat, Bharuch, Vadodara, Anand/Nadia, Ahmedabad and Sabarmati.

Land in a total of 73 villages in Palghar and 22 villages in Thane is to be acquired which will account for 350 hectares.