In Pictures: Mumbai-Goa Four Lane Coastal Highway To Be Ready In One Year, Will Cut Travel Time By Five Hours 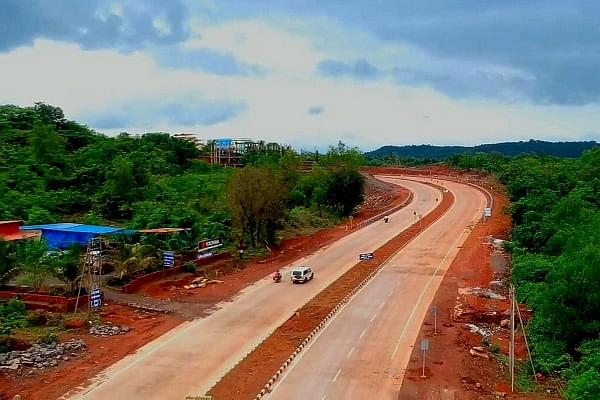 Union minister Nitin Gadkari said in the Rajya Sabha on Monday (24 June) that the Mumbai-Goa Highway Project (part of NH-66) will be completed within the next one year. He revealed this while responding to a question in the House.

The four-laned coastal highway was first proposed in 2016 and was to be completed in 2018. But the deadline was first shifted to March this year before being postponed to year-end.

The coastal highway along the seacoast is modeled on the lines of the picturesque road linking Los Angeles and San Francisco in the United States.

The project faced several challenges before the courts after the Bombay High Court stopped the construction on few stretches citing environmental concern. Last May, the Supreme Court cleared the construction work on some ecologically sensitive areas, state government sources say.

The coastal highway is expected to open up undiscovered areas of the Konkan region to tourists driving to Goa from Mumbai.

Here are some of the pictures of the ongoing work on the coastal highway.

While it takes around 12 hours to cover the 590-km distance between Mumbai and Goa, the four-laned coastal highway will cut the time required to seven hours.

The 590 KM road is part of the overall 1,622-km-long NH-66 runs along the western coast of India, parallel to the Western Ghats. It passes through Maharashtra, Goa, Karnataka, Kerala and Tamil Nadu. The highway connects the major seaports of West India from JNPT near Mumbai to Kollam in Kerala.

NH-46 is being widened and new by-passes are being developed in phases. Owing to high population density and value of land, part of the highway in Kerala and Goa will be transformed into a six-lane one (45-metres wide), and the portion in Karnataka and Maharashtra will be made 60-metres wide.