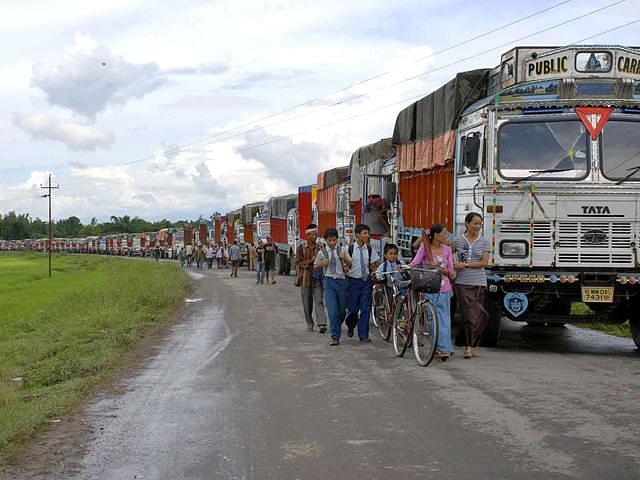 More than 100 fuel tankers and trucks carrying consumer items arrived in Imphal on Wednesday (16 November), bringing some relief to the people. This is the first supply since the 1 November imposition of a United Naga Council (UNC)-sponsored indefinite economic blockade to protest against the Manipur government's move to create a new district.

India Reserve Battalion personnel and Manipur Police commandos escorted 299 trucks and oil tankers on Monday (14 November) to deliver fuel and consumer items along the 222-km NH 37. Over 1,500 trucks and oil tankers stranded in Assam, Nagaland and border areas of Manipur had converged at Jiribam town in Imphal East district, near the border with Assam.

Initially, the drivers were reluctant to ply as they were apprehensive of their security, but were finally convinced after a meeting Minister K Biren and high-ranking officials.

Government sources, however, said they cannot be sure of the frequency of the trips. In the past, the supplies came once a week. Since the blockade, most of the consumer items are not available.

On Wednesday, some students seized a hoarded stock of potatoes kept for sale at extortionate prices and sold them to passers-by at Rs 20 a kg. The students said that the drive will continue.

Meanwhile, petrol pumps remained shut and petrol was being sold in black at Rs 300 a litre.

On Tuesday, talks to end the blockade were held in Delhi between the central government and the UNC. Since no written invitation was extended to us, we could not attend the meeting. The talks failed to yield any result.

The UNC has been demanding an alternative arrangement for the Nagas, saying that they no longer want to stay under Ibobi’s administration.